Vietnam e-commerce developing
E-commerce has developed vigorously in Viet Nam in recent years and has helped Vietnamese companies improve their businesses.
Go Back 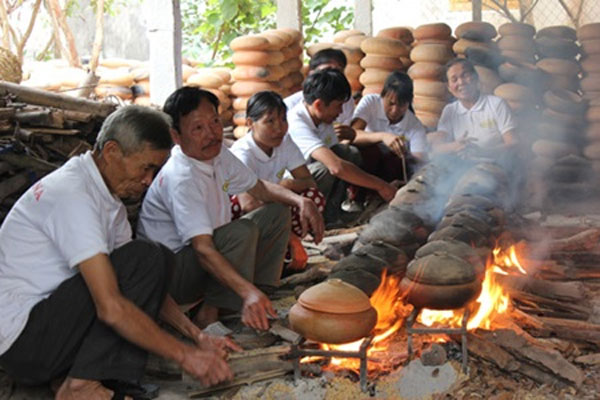 “We used oral advertisements, leaflets, online newspapers or Facebook but the economic efficiency is very low, we even suffered losses”, he added.

The company’s main product is Vietnamese Vu Dai Village’s braised fish in clay pot, which makes up half of the company’s revenue.

“The efficiency increased incredibly since I used e-commerce, so I decided to invest in this modern marketing solution,” said the director.

The company forecasts that more than 6,000 pots will be sold by the end of this year.

The country’s e-commerce sector has been growing and providing development opportunities to businesses.

Statistics from the industry and trade ministry’s Viet Nam E-commerce and Information Technology Agency (Vecita) have revealed that with up to 40 per cent of its people using Internet, Viet Nam is one of the fastest growing economies in terms of Internet users.

E-commerce turnover reached US$2.2 billion in 2013, and is expected to touch $4 billion this year.

According to a draft Decision to approve the master plan on developing e-commerce in the 2016 – 2020 period, the country expects to have 30 per cent of its population shopping online by 2020.

Business to consumer (B2C) e-commerce sales will increase by 20 per cent per year, reaching $10 billion, making up five per cent of the nation’s total retail sales and services revenue.

The draft also encourages the development of e-commerce across borders, attaching with import and export activities, accounting for 15 per cent of B2C e-commerce sales by 2020.

According to the draft, by 2020, 60 per cent of businesses will have an internet presence.

Eighty per cent of businesses will order or receive orders through e-commerce applications on the Internet or on mobile platforms.

One hundred per cent of supermarkets, shopping malls and distribution facilities will install point-of-sale (POS) system, which enables non-cash payment when purchasing.

According to the draft, the legal infrastructure for e-commerce will be completed by 2020 aiming to catch up with the development of various e-commerce models and activities in society.

The network of transport services and delivery for e-commerce will cover all cities and provinces across the country.

Safety and security infrastructure for e-commerce will be developed with the establishment of management and monitoring systems, rating of e-commerce websites and the mechanism for solving disputes and violations in e-commerce trading.

The Vietnam News Agency quoted Tran Huu Linh, head of Vecita as saying that to develop e-commerce, more work still needs to be done, especially in developing synchronously from legal infrastructure to technical infrastructure, human resources, as well as building trust among consumers.

The agency also quoted Tran Dinh Toan, deputy director of OSB Co, the official authorised dealer of the Alibaba Group in Viet Nam, as saying that many businesses have actively developed e-commerce to gain new contracts and introduce their products to the market.

According to Toan, Alibaba.com received about 16,000 offers to purchase from importers per day on average.