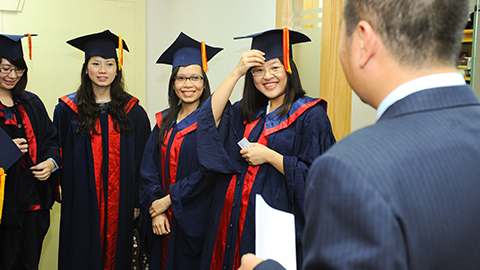 The ever-increasing demand for high quality education in Vietnam has attracted many foreign investors to the sector.

When he visited Da Nang in 2003 with his family, after looking around the city and taking in the sights of nearby Hoi An and Hue, Mr. Ricky Tan, Chairman of the KinderWorld Education Group, and his wife were surprised by the lack of investment in Da Nang given its proximity to the two beautiful cities.

With its own stunning coastline, they agreed there would be tremendous potential in the city over the next five to ten years. In 2006, at the invitation of city authorities, KinderWorld’s first campus at Le Loi Street in the heart of the city was opened, to cater to the growing international community and Vietnamese middle-class.

After further researching the potential of and demand in the city, KinderWorld decided to set up the Pegasus International College.

Mr. Tan said he has seen rapid development in Da Nang over the last few years. By 2020 the city is expected to have a population of 1.5 million people and over 2 million by 2030, and there are now more than 20 international-branded hotels in Da Nang and Hoi An.

“There has been an increasing influx of foreigners coming to the city for business and many Vietnamese have also made Da Nang their new home,” he said.

The project is one of the largest foreign direct investment (FDI) projects in education in Vietnam, covering an area of 6.5 ha with investment of $70 million and will educate 7,000 full-time students once opened.

According to Mr. Jesse David Boone, General Director of BUV, the new campus highlights the attractiveness of FDI in Hung Yen in particular and in Vietnam in general.

“Our Ecopark campus will act as a foundation for BUV in Vietnam and we are proud to commit to such a long-term investment in education.”

According to figures from the Foreign Investment Agency (FIA) under the Ministry of Planning and Investment, as at May 20 there were 213 FDI projects in the field around the country with total registered capital of $822 million.

This is still regarded as quite modest, however, especially given that Vietnamese people spend billions of dollars (nearly $1.5 billion in 2014) on overseas study because of the quality of education in the country remains low.

Although project numbers and total investment fall short of expectations it’s pleasing to note that most projects are from countries with advanced education and training sectors, such as the US, the UK, Japan, Australia, and Singapore.

Besides the two major projects mentioned above, Vietnam has also welcomed the American Pacific University project in Ho Chi Minh City, with total investment capital of $150 million, and the Nagai Vietnam project in southern Binh Duong province, with 100 per cent of its $68.9 million capital coming from Japan.

Australia’s RMIT, meanwhile, has already invested $41.1 million in university projects in the country.

According to Mr. Tan, Vietnam has a youthful population, of which 45 per cent are younger than 25 years of age.

Together with an increasing number of multi-national corporations and foreigners coming to the country, this generates tremendous demand for education and creates opportunities for investors like KinderWorld.

Given this potential, he said that KinderWorld will bolster its investments in the country by introducing outdoor adventures and learning through the first-ever Outward Bound course in Vietnam (OBV).

OBV is a member of the worldwide Outward Bound network, which currently operates in 34 countries and caters to over 250,000 participants each year.

It was initiated to develop interpersonal, leadership, and survival skills through unique outdoor activities and adventure-based learning experiences.

While Mr. Tan believes the country’s large and young population present opportunities for educational investors, Mr. Boone told VET that the people of Vietnam are known for their passion for education, which is also a factor in attracting foreign investors.

“Vietnam’s leadership, education system, and population in general have always held education in the highest regard,” he said.

“This fundamental support to develop the leaders of the future is the perfect foundation for investment in education here.” Vietnamese parents investing more than $1.5 billion in their children studying abroad in 2014 demonstrates the desire for the high-quality British degrees BUV offers.

And it’s the same degree, curriculum, lecturers, experience, and employability, at 70 per cent less than completing the same full degree in the UK, he said.

“We believe this is a value proposition that will interest many Vietnamese families and we are proud to be creating opportunities,” he added.

Appreciating the appearance of 100 per cent foreign-invested universities in Vietnam, Ms. Ngo Tuyet Mai, Director of the International Education Center at Hanoi University, said these universities as well as links formed between them and local universities are helping to make the dream of international educational quality in Vietnam come true.  (Source: http://english.vietnamnet.vn/)