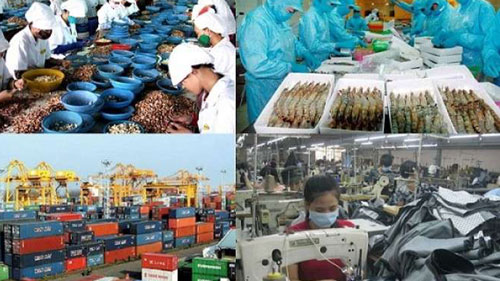 In 2015 Vietnam signed free trade agreements with the Republic of Korea and the European Union. Negotiations on the Trans-Pacific Partnership agreement concluded and the ASEAN Economic Community (AEC) was established on December 31.

Economist Le Dang Doanh said “In 2016 Vietnam will continue to restructure its economy and fierce competition is expected in the domestic market. I hope that Vietnam will carry out institutional reforms and continue to improve the competitiveness of its products so that they will be able to compete with imported ones.”

Former deputy director of the Central Institute for Economic Management Vo Tri Thanh said government policies and the role of businesses are an important factor in increasing the competitiveness of the economy. Effective reforms will make Vietnam attractive for investments. It will still be difficult for Vietnamese businesses to join chains and networks. But with flexible policies Vietnam will likely achieve more rapid growth.

Vietnam achieved a 6.68% GDP growth rate in 2015, its highest in 8 years and Vietnam is implementing a policy of economic transparency and public information, improving its business environment, and restructuring its economy to maintain a 6.5%-6.7% growth rate over the next 5 years.

Nguyen DinhCung, Director of the Central Institute for Economic Management, said “Vietnam’s economy is expected to see slow but certain recovery in 2016. The macro-economy will continue to be stable and the prices of raw materials will remain low. According to the World Bank, Vietnam’s business environment index will increase 10 levels in 2016.”

Restructuring the economy, improving the business environment, and increasing competitiveness are what Vietnam needs to do to follow a new path of development and integration.