Vietnam, EU conclude negotiations on free trade agreement
Vietnamese Minister of Industry and Trade Vu Huy Hoang and European Commissioner for Trade Cecilia Malmstrom signed an announcement on the official conclusion of negotiations on the EU-Vietnam Free Trade Agreement (EVFTA) in Brussels on December 2.
Go Back 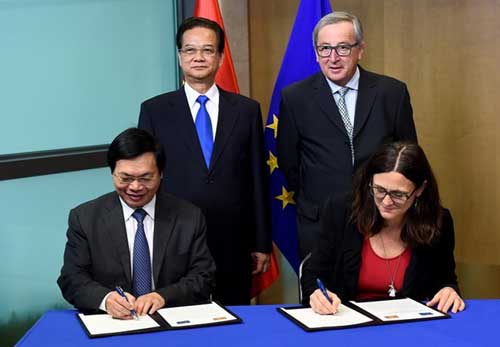 Prime Minister Nguyen Tan Dung and President of the European Commission (EC) Jean-Claude Juncker witnessed the signing ceremony which is considered a special milestone in celebration of the 25th anniversary of the Vietnam-EU diplomatic ties.

Vietnam and the EU concurred to complete the ratification process of the deal as soon as possible to put the pact into effect on the outset of 2018.

In October 2010, the Prime Minister of Vietnam and the EC President agreed to commence talks on the EVFTA after completing all necessary technical procedures. The two sides announced the official launch of negotiations on June 26, 2012 and then pushed forward with the work with active and flexible spirit.

After nearly three years with 14 official rounds of talks and multiple mid-term negotiations at ministerial, head of delegation, and working levels, Vietnam and the EU completed the negotiations on trade pact.

With this outcome, the two sides recorded a significant stride forward in their roadmap to enhance the bilateral comprehensive political partnership, especially regarding trade and investment ties.

The EVFTA is an inclusive and high quality agreement that ensures the balance of interests for both Vietnam and the EU, with due consideration of the gap of development between the two sides.

The deal was kicked off and concluded in the context of growing relations between Vietnam and the EU, particularly in economics and trade. It is expected to bring enormous economic benefits for both Vietnam and the EU due to highly supplementary and less directly competitive import-export structure.

Regarding import-export, the two sides’ strong commitments to market opening will open the door wider for various kinds of export products, especially those of their strengths such as Vietnam’s garment-textile, footwear, farm produce, seafood, and timber products and the EU’s machinery, equipments, automobile, alcoholic beverages, and some agricultural products.

Vietnam and the EU will eliminate tariffs on over 99 percent of tariff lines. For the few remaining lines, the two sides will give each other a certain customs quota or partial reduction of customs tariff.

In the field of investment, the two sides pledged to ensure a favourable, open business and investment environment, which is expected to boost the capital flows from the EU and other foreign partners into Vietnam.

As such, Vietnam could become a centre to connect the EU’s trade and investment activities in ASEAN, which will promote the country’s process of economic restructuring and switching growth model in a positive direction.

Bilateral commitments to investment, liberalization of trade of services, Government procurement and intellectual property protection are expected to open up brilliant opportunities for the two sides to make inroads in each other’s market and ensure their balanced and overall benefits.

This will help Vietnam integrate into the global economy as a full market economy.

During the EVFTA negotiations, Vietnam and the EU agreed on the framework of cooperation programmes and capacity enhancement in the fields of mutual interests.

The framework will enable Vietnam to build a legal system to support the implementation of commitments in the agreement as well as increase competitiveness for small- and medium-sized enterprises.

In addition, the signing of the free trade pact with such a developed partner as the EU will give Vietnam greater access to modern technology and management skills to generate more jobs for workers and ensure social welfare.

In the first half of 2015, bilateral trade topped US$19.4 billion, a year-on-year rise of 11%. Of which, Vietnam grossed US$14.9 billion from exports to the EU and imported US$4.5 billion worth of goods from the market.

As of the end of June, 23 out of the 28 EU member nations registered over US$38.4 billion of investment in Vietnam with over 2,100 valid projects. EU investors are active in most key economic sectors of Vietnam, mainly focusing on industry, construction and services.