Vietnam, EU reach agreement on timber export market
Vietnam and the European Union have agreed that the Timber Legality Assurance System of Vietnam (VNTLAS) will be applied for wood and wood products exported to the EU, and also to other countries and in the domestic market.
Go Back 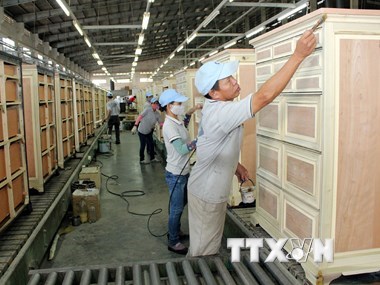 The two sides reached the agreement during their sixth negotiating session on the Voluntary Partnership Agreement (VPA) on Forest Law Enforcement, Governance & Trade (FLEGT), said Deputy Minister of Agriculture and Rural Development Ha Cong Tuan at a press conference in Hanoi, on April 13.

Tuan stated that during this session, Vietnam and the EU also reached a consensus on applying the licensing mechanism FLEGT to timber exported to the EU.

The two sides entered into negotiations on FLEGT-VPA in October 2010. All FLEGT-licensed timber and timber products from Vietnam will be considered legal and as such not subject to the requirements of the EU Timber Regulation.

The EU, which makes up about one fourth of world consumption, is now the fourth largest importer of Vietnam’s timber and wood products, after the US, Japan and China.