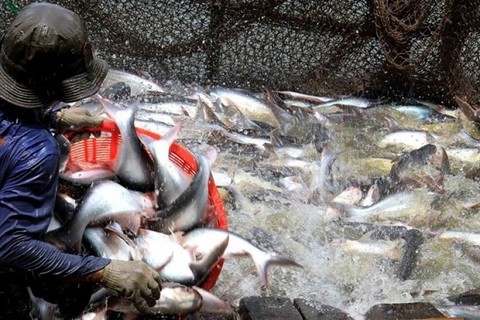 The US, Japan, China and South Korea were the top four export markets for Vietnamese seafood products, accounting for 55.3 per cent of the total national export value.

The Viet Nam Association of Seafood Exporters and Producers (VASEP) said shrimp exports provided the biggest contribution to the total national seafood export value, with a growth rate of 21 per cent to $3.8 billion in export value for 2017.

Other reasons for strong growth in shrimp exports included an increase of 10 per cent in export shrimp price, higher quality of material and high volume of processed products, Hoe said.

Meanwhile, the export value of tra fish (pangasius) reached nearly $1.8 billion in 2017, a year-on-year increase of 4 per cent despite difficulties in many export markets.

Viet Nam’s tuna export value achieved a year-on-year increase of 16 per cent to $600 million while export value of squid and octopus stood at about $600 million, gaining strong growth of 42 per cent.

A surprising point regarding Viet Nam’s seafood exports in 2017 was that China surpassed the US as the top export market of Viet Nam’s tra and shrimp products.

VASEP said that China will continue to be an important market for local seafood enterprises in the future because Viet Nam’s seafood exports to the EU and the US still face anti-dumping tax and technical barriers.

Seafood exports in 2018 are expected to reach over $8.5 billion, up about 3 per cent compared to 2017, though Viet Nam’s seafood exports to the US and EU markets will continue to be affected by catfish inspection, anti-dumping and illegal, unreported and unregulated fishing (IUU), according to the VASEP.

To achieve this target, Viet Nam must pay attention to antibiotics to ensure quality and competitiveness of Vietnamese seafood material, Hoe said.

The nation should implement traceability for seafood export products of Viet Nam as per demand of markets importing Vietnamese products, he said.

Local seafood enterprises should also focus on applying technology in processing seafood products for export to increase added value and competitiveness of Vietnamese products, he said.

The export value of agro, forestry and seafood products reached a record $36.37 billion this year, a year-on-year increase of 13 per cent, according to the ministry.

China continued to be the largest buyer of Vietnamese rice, accounting for 39.5 per cent of the total exports.

In 2017, rubber exports reached 1.39 million tonnes worth $2.26 billion, a year-on-year increase of 11 per cent and 35.6 per cent, respectively, in volume and value. China, Malaysia and India were the three largest rubber buyers.

High prices pushed cashew nut exports to 353,000 tonnes worth $3.52 billion, a year-on-year increase of 1.9 per cent in volume and 23.8 per cent in value. The US, the Netherlands and China were top importers.

Exports of cassava and cassava products were estimated at 3.95 million tonnes in volume and $1.04 billion in value for a year-on-year surge of 6.9 per cent and 4.2 per cent, respectively.

However, coffee exports decreased slightly by 20.2 per cent in volume to 1.42 million tonnes and 3.8 per cent in value to $3.21 billion. Germany and the US were still the top two export markets for Vietnamese coffee.