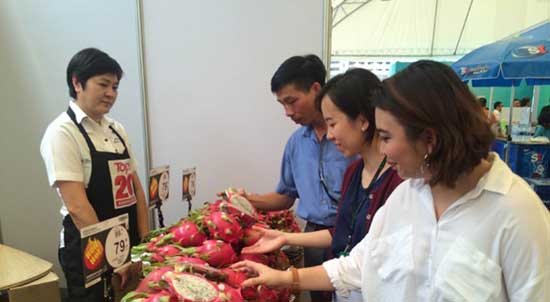 A booth at the Vietnam Goods Fair 2016 in Thailand

Delivering a speech at the Fair, Deputy Minister of Industry and Trade Nguyen Cam Tu stressed that Vietnam and Thailand should make the most of the free trade agreements (FTAs) they have joined to further enhance their trade links. Tu highlighted the potential and opportunities for the two sides to foster economic and trade cooperation, towards a prosperous future in both countries.

According to the Vietnamese official, the formation of the ASEAN Economic Community (AEC) opened up great opportunities for the two sides to boost ties through fully and deeply joining supply and value chains in the region and globally, thus expanding their market to member nations of FTAs with ASEAN.

He noted that both Vietnam and Thailand are members of several FTAs between the bloc and its partners such as China, Japan, the Republic of Korea, India, Australia, and New Zealand, so the two countries’ enterprises need to fully tap opportunities brought about by those FTAs to be able to make inroads into more markets and reinforce their links.

About 50 Vietnamese high-quality brands are displaying their goods at the four-day fair. Many goods imbued with Vietnam’s cultural identity, and traditional foods are being introduced at the event.

The same day, a Vietnam-Thailand business forum took place in Bangkok with the participation of representatives from the Vietnamese Embassy, the Thailand-Vietnam Business Council, the Vietnam Association of Small and Medium-sized Enterprises, the Thai Ministry of Commerce and those from Vietnamese and Thai businesses.

Participants pointed out the prospects for business cooperation between the two nations when FTAs between Vietnam and its partners take effect, while sharing trade experience in Vietnam and proposing ways to boost trade promotion.

The fair and forum offer chances for both countries’ firms to seek partners, to introduce opportunities in Vietnam to Thai investors, while promoting Vietnamese goods to the Thai market.

Statistics from the Vietnamese Embassy’s Commercial Affairs Office in Thailand revealed two-way trade between the countries recorded strong growth in the last five years, hitting 10 billion USD and maintaining an average growth of 10 percent in many consecutive years.

Vietnam-Thailand trade value has reached about 5.6 billion USD so far this year. The two Governments are set to lift the figure to 20 billion USD by 2020. Since then, the bilateral collaboration across fields, ranging from politics to business, culture and social affairs, has been enhanced significantly.

Bilateral trade between Vietnam and Thailand is expected to exceed 7 billion USD in 2011, making Thailand the third largest trade partner of Vietnam among ASEAN countries. Thai Consul General Somchai Powcharoen said that Vietnam-Thailand relations have developed rapidly in recent years, towards the level of partnership, especially in the fields of trade, investment, tourism and culture.