Vietnam to grow 7 percent in 2018: report
A report by the Standard Chartered Bank says Vietnam will top ASEAN economic growth this year.
Go Back 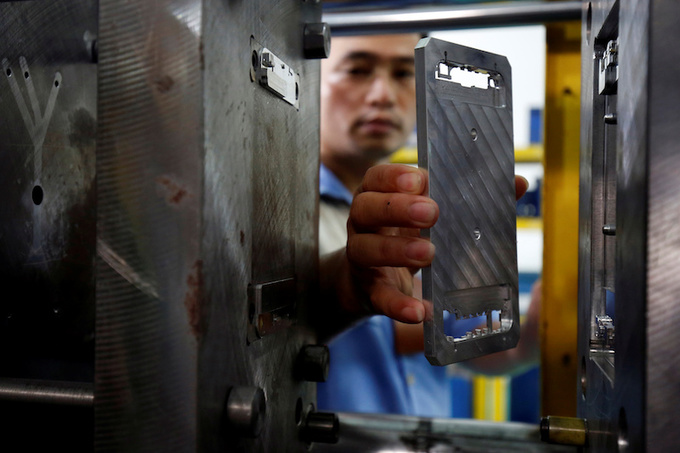 A worker holds a metal frame at a phone assembly plant in Hanoi, Vietnam. Photo by Reuters/Kham

The report, released Friday, attributed this to manufacturing and agriculture sectors.

Titled Vietnam: fast, not furious, growth,” it said the economy will grow by 7 percent this year.

Other factors contributing to the high growth is the robust growth of electronics, with high foreign direct investment inflow and increasing consumption, the report said.

It estimated next year’s growth at 6.9 percent.

Standard Chartered economist Chidu Narayanan said that Vietnam has strong growth prospects, and an average FDI inflow of about $17 billion a year can be expected from now until 2020.

Manufacturing is set to have a double-digit growth for the second year in a row, and agriculture will recover in the second half of this year, the report said.

It also saw stable growth in the service sector, led by strong consumption in the country, the report said.

The service sector, accounting for 40 percent of the economy in the first half this year, saw a 7 percent growth year-on-year growth in the same period.

The report also said young, well-trained and low-cost human resources will play a part in boosting service growth, it said.

Standard Chartered also forecast that the USD/VND exchange rate would reach VND23,400 by the end of this year.

On Thursday, the World Bank upped its forecast for Vietnam’s growth by 0.3 percent to 6.8 percent.

However, the Asian Development Bank last month lowered the growth rate from 7.1 percent to 6.8 percent, saying that the ongoing trade war between the U.S. and China could have spillover impacts on Vietnam’s export and FDI inflows.

In the first nine months this year, Vietnam’s GDP grew by 6.98 percent, the highest nine-month growth rate since 2011.

The economy grew by 6.81 percent last year, the highest rate in a decade.