Vietnam helps deepen Asia-Europe partnership
Vietnam will host a conference promoting the Asia-Europe partnership in the 21st century on April 20, representing one of the country’s significant efforts to deepen relations between the two continents, Deputy Foreign Minister Bui Thanh Son said in an interview with the press.
Go Back 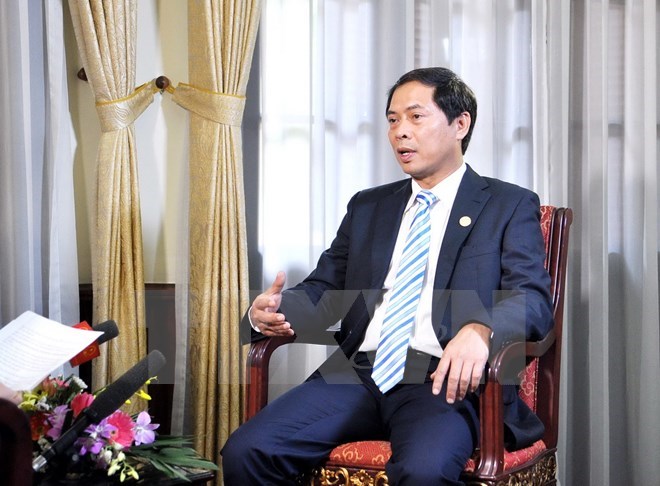 The engagement in the Asia-Europe Meeting (ASEM) as a founding member in 1996 marked a major step in implementing the country’s policies of expansion, multilarisation, and diversification of relations and international economic integration, he said, adding that Vietnam has been an active member in ASEM over the past two decades.

Vietnam’s most notable contribution was the hosting of the fifth ASEM Summit in 2004 and ministers’ meetings in the fields of economics, information-technology, external affairs, education, and labour in 2001-2012, he highlighted.

This contributed to the expansion of ASEM membership in 2004 and 2009 and adoption of documents such as the Hanoi Declaration on Closer ASEM Economic Partnership, the ASEM Declaration on Dialogue among Cultures and Civilisations, and Recommendations for ASEM Working Methods, he noted.

Vietnam has also taken the lead in carrying out a number of ASEM cooperation initiatives, he said, adding that the country proposed 21 initiatives and co-sponsored 24 others in various fields such as food security, sustainable agriculture, water resources management, natural disasters prevention, search and rescue work, and climate change adaptation.

It was also one of the countries to participate in special cooperation groups on sustainable management of water resources, natural disaster mitigation and vocational training.

The diplomat stressed that cooperation with ASEM members and active engagement in the forum brought enormous benefits for Vietnamese businesses and people for several reasons.

Fourteen out of the 16 free trade agreements that Vietnam signed or is negotiating are with ASEM partners. Among Vietnam’s 60 partners, 47 are from ASEM, he said, adding that the figures reflect the important role of ASEM members to Vietnam’s economy.

Secondly, as regional and global peace faces a number of challenges, Vietnam has closely coordinated with ASEAN members to maintain peace, security and stability for development, as well as raising voice to protect the country’s stance in safeguarding territorial sovereignty and addressing disputes via peaceful means and in line with international law, he said.

Thirdly, 24 out of the 25 comprehensive and strategic partners of Vietnam are ASEM members.

The diplomat named important agreements that Vietnam reached at ASEM Summits such as the agreement with the EU on Vietnam’s engagement in the World Trade Organisation (WTO) at ASEM 5 in 2004, the initial agreement on partnership and cooperation with the EU at ASEM 8 in 2010, and the statement orienting the conclusion of free trade agreement negotiations between Vietnam and the EU at ASEM 10 in 2014.

Fourthly, through cooperation on management and mitigation of natural disasters risks along with the ASEM dialogue on sustainable development with the focus on Mekong-Danube cooperation, Vietnamese ministries, sectors and localities have obtained experience and practical support from ASEM members to cope with climate change, water resources management and environmental protection, he added.

He noted that the EU pledged 1.7 billion EUR to implement Mekong programmes in the 2014-2020 period, while China committed to cooperating and offering financial aid for downstream countries in the Mekong River, he said.

Vietnam is entering a new development phase and pushing ahead with renovation, economic restructuring and international integration, he said, stressing that Asian-European partners and ASEM hold significance in the fields.

According to the Deputy FM, ASEM will continue to be one of the most important cooperation mechanisms in the region.

To increase Vietnam’s contributions to ASEM, he suggested coordinating with ASEAN member states to deepen the Asia-Europe comprehensive partnership.