Vietnam has huge potential in franchising: experts
Many international and regional brands will enter Viet Nam’s retail and franchise sector in the coming years, according to experts taking part in Viet Nam Retail and Franchise Conference held in HCM City on Wednesday.
Go Back 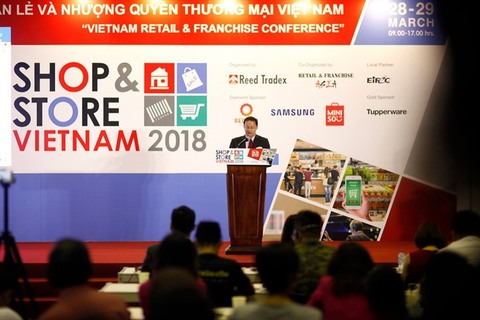 “Viet Nam has all the potential elements, such as a large consumer base, rapidly rising incomes and a generation of educated, young and growing professionals, bringing an optimistic prospective for national and international brands to double its retail and franchising industry in next five years,” he said.

Viet Nam was ranked ninth of the top 12 markets identified by members of the International Franchise Association as the most valuable markets for international expansion. It was also profiled in the Top Markets Report.

Nguyen Phi Van, founder and chairwoman of Retail & Franchise Asia, said Viet Nam has not had a professional franchise market.

Franchising began in Viet Nam in the 1990s with the introduction of well-known fast food chains like KFC, Lotteria, and Jollibee. It began in regional countries like Malaysia, Singapore and Thailand in the 1980s.

The Vietnamese franchise market is still new, and local businesses do not have much understanding of or experience with it, she said.

More Vietnamese businesses are now exploring new business opportunities available via franchising. Nevertheless, there are a number of risks that a franchisor should investigate carefully before engaging or expanding in business in Viet Nam.

On the other hand, Vietnamese franchisees need to be knowledgeable about the franchise business as well as seek consultancy from industry experts to avoid risks.

“In the next five years, there will be a strong evolution when we learn lessons from failure and successes in the past five years,” Van said. “From 2018 and beyond, Viet Nam will continue to be a destination for international brands, especially regional brands. At the same time, local brands have started to develop platforms to promote their brands in the world market.”

Bill Schreiber, vice president of international development at Little Caesars, said: “We are the third largest pizza brand in the world. We are not in Viet Nam right now… So the reason we are here is to create brand awareness and to let people know we are interested in coming to Viet Nam.”

Viet Nam’s pizza consumption is growing by over 7 per cent per year, he said, adding that his company would enter Vietnamese market in one of two ways. “We can either have one franchisee take the whole country or we can have two franchisees in the country’s north and south so we can grow at the same time.”

Tran Anh Minh, expansion manager at Typperware Vietnam, said by participating in the show, the company wants to find distribution agents for its products in the Vietnamese market.

Currently, it has 33 stores nationwide and targets having more than 100 stores by 2020, he said.

The development of technology has changed the landscape of the retail industry, delegates said.

Many brick-and-mortar businesses don’t take cash anymore, and mobile wallets and other convenient digital payment methods are meeting the demand of people everywhere.

Some retailers are taking it to the next level with their own programmes by combining mobile wallets with loyalty programmes, offering shoppers the chance to both pay and earn rewards with one easy tap on their smartphone.

Suttisak Wilanan said: “The ease of conducting financial transactions with cashless payments has opened a new era of shopping and customer experience. People will no longer need to carry wads of cash, plastic cards, or even queue up for ATM withdrawals. It’s also a safer and easier spending option when people are travelling.”

Tran Trong Huy Thong, brand and marketing manager of Miniso Vietnam, said: “The Compound Annual Growth Rate of Viet Nam in 2011-20 is forecast to be among the highest in ASEAN region, reaching 8 per cent, giving a casual fashion department store brand like Miniso many opportunities as well as challenges.

“Young customers in Viet Nam are willing to spend more and want to shop more convenient,” he said.

Organised by Reed Tradex and Retail & Franchise Asia, the conference was organised on the sidelines of the Shop & Store Vietnam 2018” exhibition and conference, which is being held at the Saigon Exhibition and Convention Centre from March 28-20.