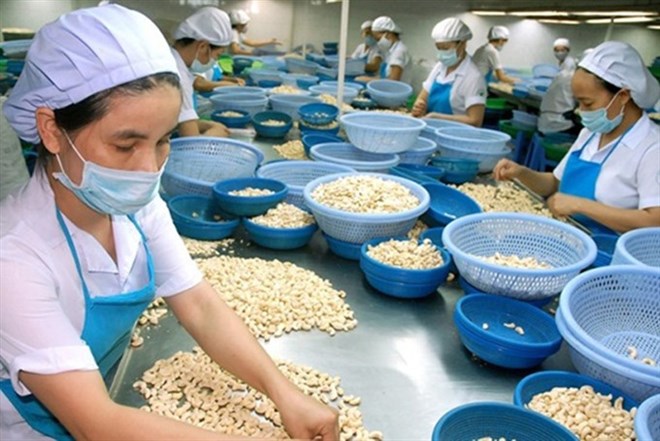 In the first eight months of this year, 825,000 tonnes were imported, mostly from West African countries.

“If the export volume this year is equal to that of last year, we will need to import 300,000 tonnes,” Uy said.

In the first eight months of this year, 242,000 tonnes have been exported.

Uy and other Vietnamese processors said they could buy the raw cashew but only if they meet standards. They complained about the quality of African materials, saying the quality is often lower than stated in contracts, and they incur losses as a result.

Pham Van Cong, President of the Vietnam Cashew Association (Vinacas), said next year the association would use Vietnam National Standard TCVN:2018 for imports of raw cashew.

It is expected to be a basis for Vietnamese companies and foreign raw cashew suppliers to trade and deal with trade disputes if any, he said.

Accordingly, from next year, imports must meet certain requirements such as grading, sensory requirements, physical properties and food safety.

Adama Coulibaly, Director General of the Ivory Coast’s Cashew and Cotton Council, said his country produced over 710,000 tonnes of raw cashew nuts last year, but only processed about 178,000 tonnes.

It wanted to cooperate with Vinacas to develop its cashew sector, he said.

“Global output is forecast to reach 3.8-4 million tonnes by 2020. Four million tonnes may be the saturation point for the global cashew consumption market.”

Vietnam is the global leader in cashew processing and technology and also the largest raw cashew importer, accounting for a third of global output.