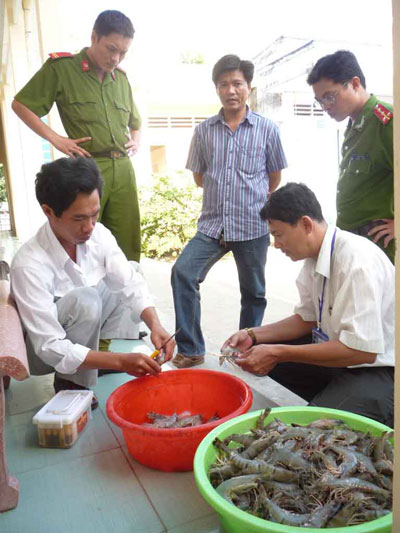 Local newspapers quoted sources as reporting that shrimp processing workshops in Mekong River Delta are now running at just 50-60 percent of capacity because of the lack of capital.

Though processors are willing to pay high prices, shrimp supply is low because farmers who have experienced mass shrimp deaths are not continuing to breed.

Meanwhile, Vietnamese processors have to compete fiercely with Chinese businessmen to collect shrimp.

According to the Department of Agriculture and Rural Development of Ca Mau, the province with the largest shrimp cultivation area, the total shrimp output in the first five months of the year was 134,000 tons, just fulfilling 40 percent of the plan.

“After the shrimp crop failed completely, I tried another crop. However, the unfavorable weather conditions have made my 2-month old shrimp die,” Tuan said amid shrimp price escalation.

Processors and exporters are also in distress.

Ngo Thanh Linh, secretary general of the Ca Mau provincial Association of Seafood Exporters and Producers (CASEP), said the shrimp shortage had become even more serious because of competition from Chinese businessmen.

“Ecuador has been the major material supply source for China. However, since the country has suffered from an earthquake, the supply has fallen,” he said.

“Chinese businessmen flock to Vietnam in hopes of collecting shrimp to offset the supply decrease from Ecuador,” he explained.

Le Van Quang, deputy chair of the Vietnam Association of Seafood Exporters and Producers (VASEP), said Vietnam’s shrimp industry had been unstable in the past few years because of high prices and low competitiveness. Vietnam’s exports are meeting difficulties in the US, EU and Japan.

Some Japanese importers have threatened to buy shrimp from Indonesia and the Philippines, though exporters offer prices higher by $2.5-3 per kilo than Vietnamese exporters.

Japan now wants to examine 100 percent of shrimp consignments from Vietnam, which has pushed the export prices up and weakened the competitiveness.

The EU has also given warnings about the antibiotic residue in seafood exports.