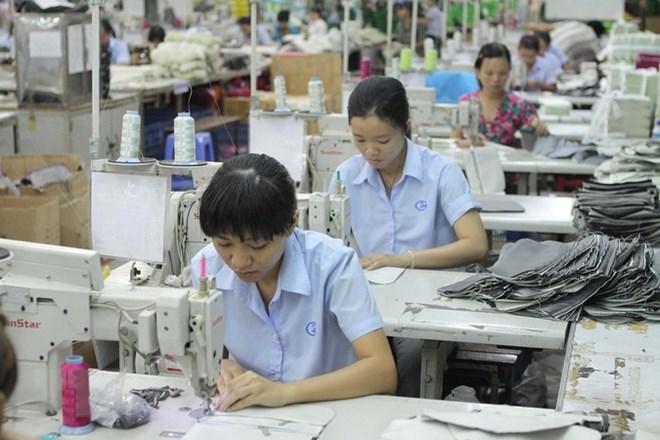 Workers at a garment factory

The new framework will help the country address its industrial relations challenges – shown through wildcat strikes starting in the mid 1990s – and comply with its labour commitments in the new generation of free trade agreements (FTAs) including the EU-Vietnam FTA and the Comprehensive and Progressive Agreement for Trans-Pacific Partnership (CPTPP).

As it moves towards a market economy, Vietnam needs modern labour laws, stronger industrial relations institutions and representative organisations and better enforcement capacity to reap the rewards of international trade and investment.

“Vietnam is on a pathway to reform through both international integration and the increasing application of modern market economy principles,” said ILO Vietnam Director Chang-Hee Lee.

Party Resolution No 6 in November 2016 and Party Resolution No 27 in May 2018 clarified the State’s intention to intervene less in labour relationships and to promote collective bargaining and dialogue as the key means of settling terms and conditions of work.

To support the country in this labour reform, the “Project on Promoting the development of a new industrial relations framework in respect of the ILO Declaration on Fundamental Principles and Rights at Work” (NIRF project) was launched on November 9 by the Ministry of Labour, Invalids and Social Affairs (MoLISA) and ILO.

The 4.3 million USD project is financially supported by the US Department of Labor and the Japan’s Ministry of Health, Labour and Welfare in the form of official development assistance.

Its implementing partners include the Vietnam Chamber of Commerce and Industry and the Vietnam General Confederation of Labour.

NIRF’s goal is to lay the legal and institutional foundations for a new industrial relations framework, based on the 1998 ILO Declaration on Fundamental Principles and Rights at Work, in full consideration of Vietnam’s context.

By the end of the project, Vietnam should have national labour laws and legal instruments consistent with the 1998 ILO Declaration. It should also have a better-functioning labour administration system for the new industrial relations framework, a more effective labour inspectorate to enforce and promote compliance and enhanced representation of workers and employers.

The elimination of forced labour, child labour and discrimination at work makes up the other cornerstones of the 1998 Declaration – the central pillar upon which labour requirements of the new generation of FTAs are built.

He listed the gaps, including labour laws not yet in line with ILO standards and limited State management capacity in industrial relations such as law dissemination and labour inspection. He also pointed out that trade unions have not yet effectively represented workers or protected their rights and benefits, while employers’ organisations are facing challenges in modernising activities to better support members.

In that context, he expects the NIRF project to support Vietnam in advancing its labour law reform in line with international standards and in consideration of the country’s socio-economic development to reach its international integration goal.