Vietnam plans to spend more on tourism promotion to boost growth
In a new effort to attract more foreign visitors, Vietnam's tourism authority seeks to increase spending on marketing three-fold to VND120 billion (US$5.24 million) next year.
Go Back 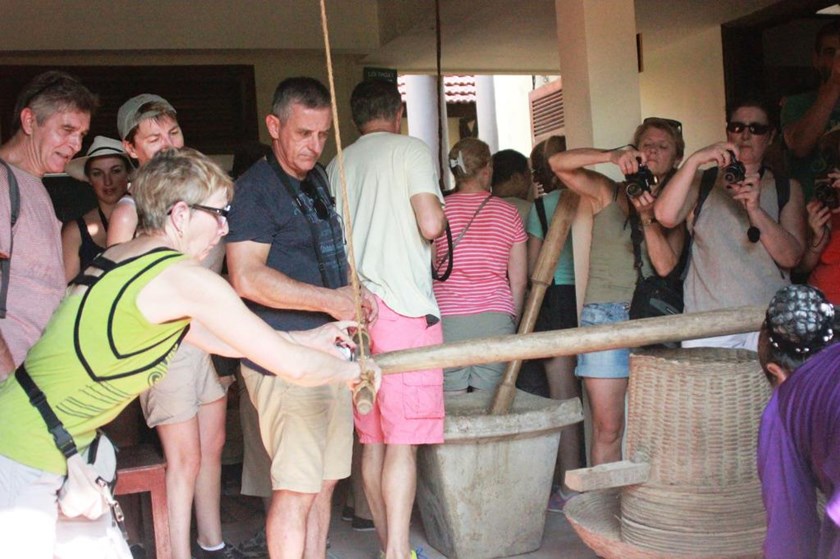 A file photo of foreign tourists visiting an exhibition on farming tools in the central province of Thua Thien-Hue. Photo: Dinh Toan/Thanh Nien

A fund for tourism promotion is set to be established with an initial corpus of at least VND300 billion ($13.11 million), news website Saigon Times Online said Saturday, citing a proposal by the Ministry of Culture, Sports and Tourism.

In the long term, a maximum of 30 percent of the fund would come from the government, with the rest coming from beneficiaries of tourism, it said.

Minister of Culture, Sports and Tourism Nguyen Ngoc Thien said at a meeting in Hanoi on July 13 that poor marketing is one of the reasons for the lackluster growth in tourism.

Other reasons include a dearth of outstanding products and quality human resources and services, he said.

The proposal, which is waiting for local governments’ feedback, is expected to develop tourism into of the economy’s flagships through a range of measures such as extending visa waiver policy with longer visa-exempt stays and easing the issuance of visa on arrival, the website reported.

Though Vietnam has great potential for tourism growth with its rich cultural and natural assets and good connectivity with other Southeast Asian countries, its international arrivals are only 27 percent of Thailand’s, 31 percent of Malaysia’s and 52 percent of Singapore’s, according to figures released at the meeting.

In 2011-15 its tourism grew an average of 7 percent a year, compared to 12 percent in Thailand and 10 percent in Singapore.

In fact, its performance was also poorer than that of second-tier countries such as Laos, Myanmar and the Philippines, which recorded growths of 15 percent, 51 percent and 8 percent.

However, arrivals rose 21.3 percent year-on-year to more than 4.7 million in the first half of this year, according to data from the Vietnam National Administration of Tourism.