Vietnam posts positive year in 2018
The Vietnamese manufacturing sector continued to record solid growth in December, helping the country show the strongest upturn in ASEAN during the last month of 2018.
Go Back 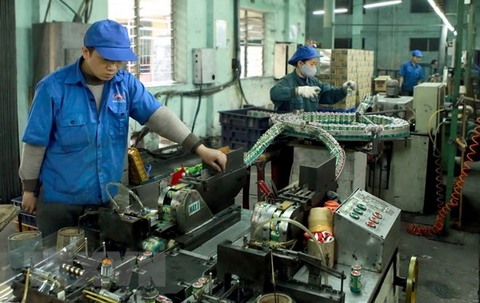 Viet Nam’s PMI was 53.8 in December, signalling solid improvement in the health of the Vietnamese manufacturing sector.

According to the latest survey from Nikkei’s IHS Markit, released on Wednesday, Vietnam Manufacturing Purchasing Managers’ Index (PMI) – a composite single-figure indicator of manufacturing performance – was 53.8 in December, signalling solid improvement in the health of the manufacturing sector.

Although down from November’s near-record reading of 56.5, the latest figure was in line with the average for 2018 as a whole. December rounded off a positive year for Vietnamese manufacturers, with the average PMI reaching its highest level for any calendar year since the survey began in 2011.

“The recent success of Vietnamese manufacturing firms in generating strong new order growth continued in December,” said Andrew Harker, Associate Director at IHS Markit, which compiles the survey. This meant that 2018 as a whole was the best calendar year for the sector since the PMI survey began in 2011 and leaves the industry well placed to have a positive 2019 despite headwinds elsewhere in the global economy.”

Output continued to increase in December, with growth softening from that seen in November but remaining solid nonetheless. The same was true for new orders, where a marked expansion was recorded that extended the current sequence of growth to 37 months. New export business also rose at a solid pace.

Recent increases in new orders exerted capacity pressure on manufacturers, with backlogs of work increasing for the second month running. Firms responded to greater workloads by taking on extra staff for the thirty-third consecutive month.

According to the survey, the softening of input cost inflation seen through much of the second half of the year gave way to an outright monthly fall in input prices during December. This was the first reduction since February 2016. There were reports from panellists of lower costs for items such as oil and paper.

“With input prices decreasing, Vietnamese manufacturers lowered their output charges accordingly,” the survey states. “Selling prices have now decreased in three of the past four months, with the latest reduction the most marked in almost three years.”

Manufacturers generally expect output growth to continue over the coming year, with confidence linked to predictions of more new orders and business expansion plans. Sentiment was broadly in line with the series average, having dipped from the near-record optimism seen in the previous month.

Positive expectations encouraged firms to increase their purchasing activity again in December, and at a higher pace. Efforts to build inventory reserves were also evident. Stocks of both purchases and finished goods increased at the end of the year, albeit to lesser extents than seen in November.