Vietnam to reduce pepper area to focus on quality
The pepper industry plans to reduce the area under the spice and focus on improving quality to ensure long-term growth, according to the Ministry of Agricultural and Rural Development.
Go Back 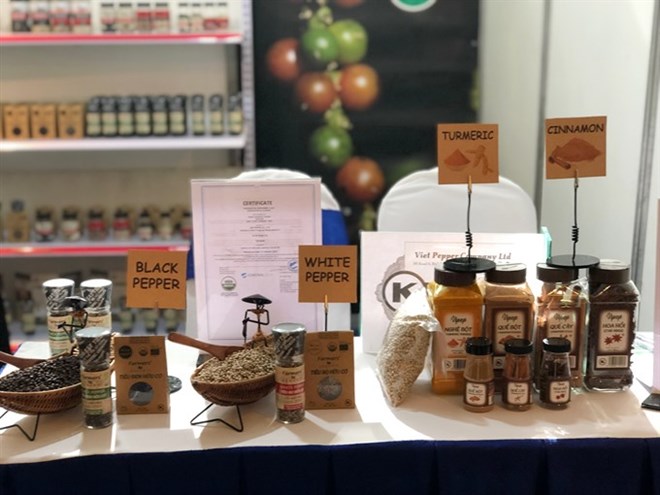 Pepper products on display on the sidelines of an international pepper conference in HCM City on December 4.

The cultivation area has increased sharply since 2010 to 152,668ha last year, exceeding the area zoned in the Government’s plan by 100,000ha.

High prices for pepper in recent years have incentivised farmers into expanding even to unsuitable lands and without any planning.

Speaking on the sidelines of a recent international conference titled Vietnam Pepper Outlook in Ho Chi Minh City, Minister of Agricultural and Rural Development Nguyen Xuan Cuong said: “Pepper is a special agricultural product, a kind of spice. Therefore, demand for it is just at a certain amount. We cannot increase the cultivation area and output by too much.”

Vietnam is among the five biggest pepper producers in the world, with its cultivation area and output accounting for a third of the world total, and exports for 60 percent.

“So we must be aware and have responsibility.

“But we need to focus more on applying modern processing technologies to add more value to the spice and strictly comply with quality and hygiene and food safety standards during the production and processing processes.

Nguyen Nam Hai, chairman of the Vietnam Pepper Association, said spice is among the country’s key agricultural exports, with shipments being made to more than 100 countries and territories.

But with supply outstripping demand in the last three years, prices have fallen, affecting farmers’ incomes, he said.

The sector would mobilise farmers to stop growing the crop in places not suitable for it and replace it with others, he added.

Hoang Thi Lien, executive director of the International Pepper Community, said: “The good news is that pepper demand will double in the next 30 years from the current 500,000 tonnes to one million metric tonnes.”

The new trend is “the industrial use of pepper to make nutraceuticals, skin care products and others”, she said.

Increased awareness of sustainable growing practices would benefit growers and consumers, she said.

Lien and many other delegates agreed that the quality of Vietnam’s pepper has improved significantly in the last few years, but said more efforts are needed to further improve and should start at the farm level.

Gerhard Weber, secretary general of the European Spice Association, said: “A small decrease in pesticide residues has been observed in pepper coming from Vietnam.

“But only 46 percent of pepper imports from Vietnam meet the EU’s legal requirements. Efforts are needed to improve the situation.”

Lien said food safety is an increasing concern in many countries, with many new regulations emerging.

All stakeholders involved in the industry should join hands to further improve quality, she said.

“A majority of Vietnamese farmers harvest and store pepper in accordance with GMP (good manufacturing practices), harvest when 10 percent of berries ripen, dry them under the sun for two to three days to reduce moisture to under 13 percent and store in double-layer bags to prevent moisture.”

Most pepper processors use state-of-the-art equipment and apply international management systems such as GMP, HACCAP, ISI 22000 and BRC, she said.

According to the Ministry of Agriculture and Rural Development, Vietnam has reduced pesticide use by 30-50 percent, including for pepper, improving quality, the environment and eco-systems, she said.

Farmers would continue to be trained in GAP, IPM and how to use fertilisers and pesticides at the right time and in the right way, she added.

Pepper exports increased by 9.3 percent in volume terms but fell by 32 percent in revenue terms in the first 10 months of the year, with the US, China and India being major markets.

Talking about the outlook for Vietnam, Oanh said it would continue to be the world’s production and export hub, with 50-60 percent of its output meeting the EU and US’s ASTA by 2020 and 80-90 percent by 2030.