Vietnam remains optimistic despite loss of revenue from crude oil exports
The government, when planning the nation’s budget for 2016, has estimated that crude oil will make up 10 percent of the budget revenue for the year, which means that Vietnam still plans to increase the crude oil output.
Go Back 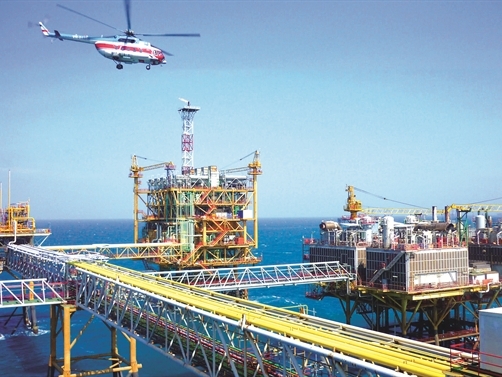 The first oil flow from the H5 rig in late October began mixing with the national exploitation system, raising the total output of Te Giac Trang (White Rhino) Field to 42,000 barrels per day.

The project’s operation will help increase the investor’s and the government’s profits to $400 million. Besides, it will also play a very important role in improving the crude oil exploitation capacity.

In early 2015, despite the analysts’ warnings about the continued oil price decreases, the government still hoped Vietnam would be able to earn VND159 trillion from oil exports.

However, by the end of September, Vietnam had earned VND115 trillion only from oil sales, thus raising the worry that the real revenue in 2015 would be VND63 trillion lower than the estimates.

This was attributed to the fact that the average export price plummeted to $56.7 per barrel. Meanwhile, the export price estimated by the government in early 2015 when calculating the state budget revenue was $100 per barrel.

In early 2015, when the oil price stayed at $58 per barrel, experts warned that the state budget would see the loss of VND50 trillion in revenue. The World Bank and OPEC also showed their concern about the oil oversupply all over the globe. But the Ministry of Finance still believed in its ability to balance the budget.

An analyst commented that in previous years, it was not too difficult for MOF to offset the revenue decrease from oil exports with revenue from other sources. However, things will be different now, when Vietnam sees the collected taxes decreasing as a result of tariff cuts.

The National Assembly’s Finance & Budget Committee has also warned it would be a difficult task to balance the state budget in 2016 if the government still insists on the targeted GDP growth rate of 6.8 percent and 10 percent contribution of crude oil sales to the state budget.

According to MOF’s Deputy Minister Do Hoang Anh Tuan, in the most optimistic scenario, the crude oil price would be $60 per barrel.