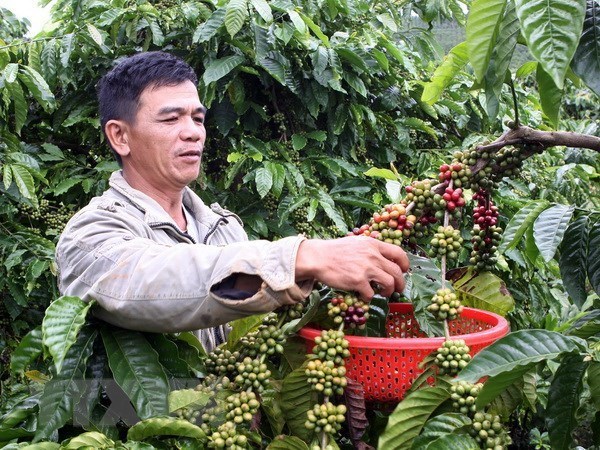 A farmer is harvesting coffee

Specifically, the country hopes to increase the output of roasted coffee from 26,000 tonnes at present to 50,000 tonnes by 2020, mainly for domestic sale.

The ministry has encouraged localities, particularly in the Central Highlands, south-eastern and Mekong Delta regions, to develop technologies to process some 55,000 tonnes of instant coffee annually.

Despite making up a modest percentage of the country’s total coffee beans, processed coffee is expected to rake in more than 1 billion USD from exports and domestic sales, a quarter of the sector’s production value.

The ministry said it will support the implementation of coffee processing investment via restructuring products to increase added value.

The State will also help export firms train staff with qualifications and English proficiency, promote trade and participate in international coffee workshops and fairs as well as call for investment in processing industry, set joint ventures and get involved in foreign supply chains.

Processing coffee is a stage that creates the highest added value from 70 to 100 million VND per tonne of coffee beans. However, processed coffee makes up less than 10 percent of total coffee production nationwide.

The country only has eight instant coffee processing plants and 11 mixed instant coffee ones with respective capacity of 36,480 tonnes and 139,850 tonnes per year.

On the other side, Vietnam has hundreds of small-scale roasted coffee processing facilities.

The Central Highlands province of Dak Lak is a key coffee area of the country, but its processed coffee only comprises about 10 percent of total coffee beans.

The locality has 163 coffee processing facilities, mainly operating on a small-scale, including five invested in by foreign firms.