Vietnam sees new investment wave from Europe
Investment and goods flowing from Europe to Vietnam have increased greatly as the EU-Vietnam FTA will take effect next year.
Go Back 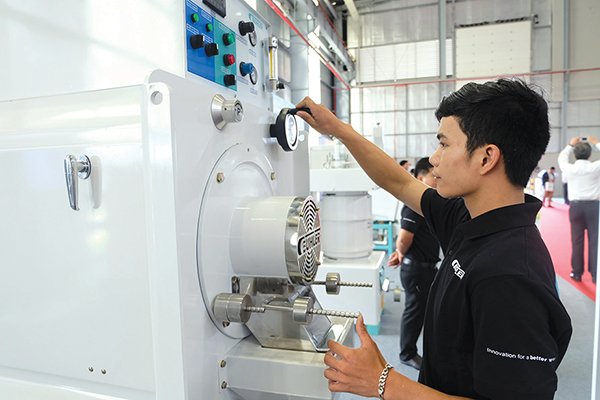 De’Longhi, the Italian household-use manufacturer, is selling electrical household appliances and kitchenware to Vietnam. The products, bearing Ariete and Vintage brands, are now distributed in Vietnam through An Gia Tien JSC.

Marco Dellernia, managing director of Ariete, hopes the sales would reach $2 million in the first year and double the next year before reaching $8 million in the third year.

A series of European interior decor brands have expanded  in Vietnam, AKA Furniture Group has introduced Baxter, Minotti and Ligne Roset, the brands from Italy and France. Eurasia Concept has brought 30 European interior brands to Vietnam.

Leonardo Cangioli, representing Officina Luce, which is seeking business opportunities in Vietnam, said Officina Luce products are priced between several thousands and tens of thousands of euros. However, he believes the products will sell in Vietnam thanks to the rapid income development.

An analyst noted that instead of importing machines and equipment from Asian markets, including China, Taiwan, South Korea and Japan, Vietnamese enterprises now tend to import European products.

Fabrizio Bellagamba from Comelz Italia, a supplier of equipment for leather shoes industry from Italy, said in 2017, the company provided 100 machine and equipment products in Vietnam, up by 40 percent over the year before, while the figure is expected to rise to 140 this  year.

According to Paolo Lemma, Italian trade commissioner to Vietnam, Italia’s export turnover of equipment for shoes and leather to other countries grew by 10 percent in 2017 compared with 2016, while the export turnover to Vietnam doubled to 30 million euros.

Henri-Charles Claude from CCIFV said at the France-Vietnam Business Forum held on the occasion of the French PM’s visit to Vietnam that now is the time for French businesses to seek opportunities here.

Meanwhile, Jean Jacques Bouflet from EuroCham has advised European businesses to do business in Vietnam in anticipation of the EVFTA.

Vietnam is not only a large market, but also serves as a bridge that connects European companies with the ASEAN market with 630 million consumers.

In Vietnam, Nestle now has six factories making coffee, tea and drinks. It recently put into operation the coffee capsule production line in Dong Nai, planning to export 90 percent of the products to Thailand, the Philippines, Malaysia and Singapore.