Vietnam strives to be leading cacao exporter
Being an only Asian country to plant and export fermented cacao to make chocolate, Vietnam is expected to be one of the largest exporters in the region.
Go Back 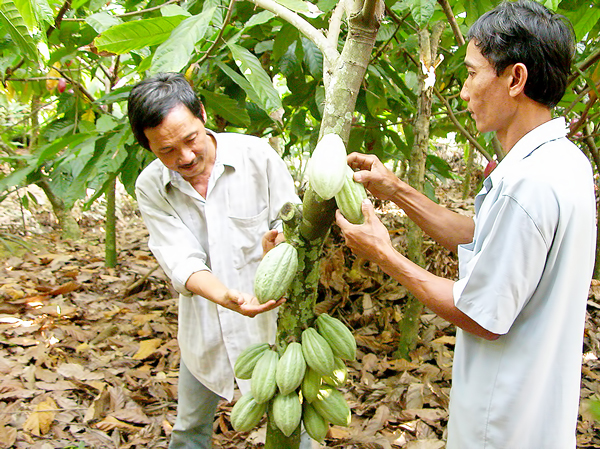 One of other advantages that Vietnam is member of the ASEAN-China Free Trade Agreement (ACFTA), therefore, Vietnamese cacao products will not be imposed tax like other rivals from West Africa or South America.

In 2013, the prize of best cacao products of the Asia-Pacific region presented in Paris – France was made from Vietnamese cacao seeds.

Accordingly, cacao processing companies in the world ranked Vietnamese cacao as the best quality like Ghana and Brazil.

The International Cocoa Organization (ICCO) made Vietnam in the list of these countries which produce cacao with best fragrant in the globe.

Asian nations imported over 500,000 tons of fermented cacao a year from West Africa or South America.

Yet the supply did not meet the demand because the trees are gnarly old  and have worms to cause diseases.

Moreover, farmers in these countries have not had fermented cacao and did not apply advanced technologies so they did not supply cacao with high quality even some switched to plant other trees.

ICCO’s statistic showed that demand of cacao increased by 3 percent per year yet the supply decreased; a result, the price leaped. Cacao is one of agricultural trees namely pepper maintained stable.

By statistics, by 2020, if the area for growing cacao do not increase and demand still surge, it will be seen a shortage of cacao.

In Vietnam, from 2004 to 2012, farmers received support from the government, non-governmental organizations and chocolate producers; they planted more cacao trees; subsequently, the area for growing the tree increased from 4,270 hectare in 2005 to 25,700 hectare in 2012.

However, after that, price of cacao dropped half standing at VND3,000 per kilogram; farmers chopped down the tree to switch back to other tree.

Though later farmers re-planted the tree, in 2015 the area for the tree in the country was 11,700 hectare, or it lost 14,000 hectare for planting other tree.

Farmers have still hesitated to re-plant the tree as they fear for a price fell like the period 2012-2013.

Consequently, farmers did not consider cacao as major tree for export.

Vietnam Company said that to grow the tree sustainably, farmers should apply advanced technologies in plantation and production.

Above all, enterprises must partake in the procedure with lead role like other sectors such as cashew, coffee, sugar, tea and cassavas.

Mr. Lam and his partners have set up Intercontinental Corporation (CIC) with the hope to push up the tree plantation.

If the company is successful in promoting the tree, it will pave the way for other companies to follow suit; accordingly it will be able to make Vietnam to be the best quality cacao exporter in the world.