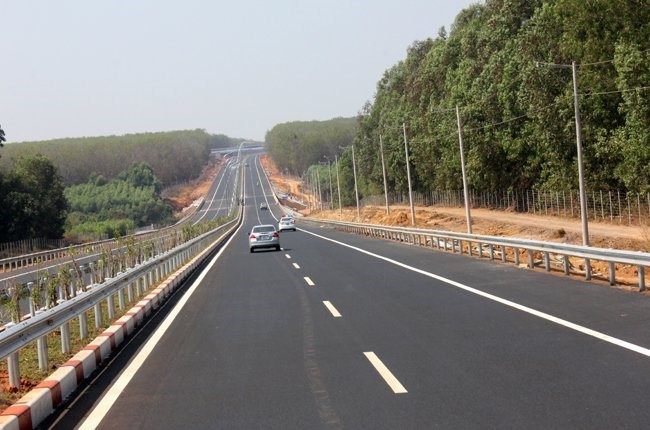 Vietnam is seeking to attract investment to develop its transport infrastructure, but it is not an easy task since local companies have limited finances while foreign ones are not interested in the business.

The Ministry of Transport said recently it needs around VND288 trillion (US$13.03 billion) over the next five years for transport infrastructure.

More than half of this is for roads, according to a ministry plan that is awaiting feedback from related agencies before being submitted to the government for approval.

Most of the funding has to come from local and foreign investors, with the government only able to provide 30 percent of it.

But without a developed stock market local private players mainly depend on bank loans for such projects, which require large sums for long terms.

“Getting long-term loans is now a challenge for local private investors,” Le Tuan Anh, deputy head of the Ministry of Finance’s Investment Department, said at a recent meeting. “Commercial banks are now wary of long-term investments due to a general aversion to risk.”

Most banks, however, only consider projects that break even in 15 years or less, he said.

VND2-3 trillion ($95.2-142.9 million) projects would not generate enough returns in the first seven to 10 years to even cover interest payments, he said.

For long-term loans, banks could require government guarantees, but the government has decided not to offer guarantees to domestic banks to reduce public debt, he said.

Slow site clearance, a routine problem facing infrastructure projects in Vietnam, is also a disincentive for investors considering such projects.

Widening of the Hanoi Highway in Ho Chi Minh City was begun in 2010 and scheduled for completion in 2012. But only 47 percent of the contracted work has been completed now due to delays in site clearance.

A Japanese contractor recently demanded compensation of $100,000 per day from local authorities after the Vietnamese side delayed site clearance for the Ben Thanh – Suoi Tien metro for 30 months.

Local authorities were slow to move out a company from a piece of land required for the metro and the company said the delays cost it money.

The compensation could raise the cost of the city’s first metro line by 4 percent, Vietnam Television reported.

Shortage of experience in executing large projects is also a problem for local private investors. Foreign investors, who have both the resources and experience, are not interested because the country lacks the legal framework required to develop effective public–private partnerships, according to industry insiders.

In the past decade Vietnam has repeatedly sought foreign investment to rebuild National Highway 1, but has found few takers, Dung of TASCO said.

Official development assistance could be a source of funding but it is becoming more and more expensive and harder for Vietnam to get it since it has become a middle-income country.

Vietnam has received around $80 billion in ODA funds in the past 30 years, with a large portion being allocated to infrastructure related to transport, ports, airports, and urban development.

Only a very small part of it is non-refundable, with the rest being loans with higher interest rates than generally assumed. And these rates and fees increase if disbursement is delayed or the use of loans is inefficient.

Two thirds of such international loans have been earmarked for infrastructure projects where the bidding process and equipment purchase have long been considered fertile ground for corruption.

The latest case of graft emerged last year, when the Japanese media reported that officials from Japan Transportation Consultants Inc. (JTC) confessed to the police they had bribed Vietnam Railways officials to secure a contract for the Hanoi urban railway project.

In 2008 a senior Vietnamese official was charged with taking bribes from a Tokyo-based company in connection with a highway linking the east and west of Ho Chi Minh City.

The project was also funded by Japanese ODA.

Some donors insist that firms from their own country should get contracts for ODA projects, which increases cost due to the monopoly factor, he added.

Newswire VnExpress quoted an infrastructure expert as saying that while ODA interest rates may be lower than on bank loans, contractors often have to fulfill conditions stipulated by the donors — like using high-priced design, consultancy, and supervisory services provided by companies from their country.

This inflates the cost of a project to 1.5-1.8 times compared to other sources of funding, he said.

Thanh said Vietnam should gradually reduce its use of ODA before calling a halt to it.

Countries that have made good use of ODA, such as South Korea and Singapore, have now stopped seeking them to ensure stable development, he said.

South Korea stopped receiving ODA after 20 years and fully repaid the loans after 30 years, he added.