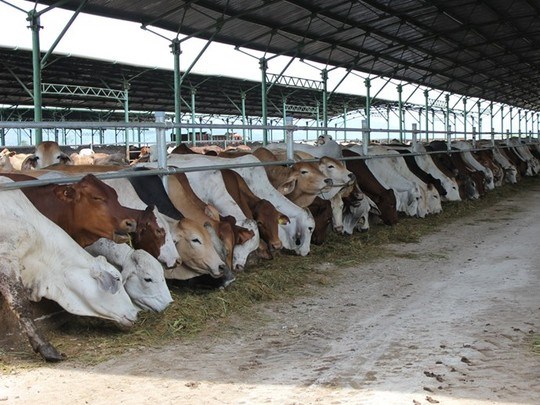 Infonet quoted its sources as reporting that 71,000 cows were imported in the first four months of the year to fatten for sale.

According to Tong Xuan Chinh, deputy head of the Animal Husbandry Department, Vietnam is one of the biggest importers of Australian cows, just after Indonesia and China.

In 2015, Vietnam imported over 300,000 Australian cows. Vietnam wants to increase the proportion of beef in the Vietnamese diet to 20 percent by 2020.

Also according to Chinh, Vietnamese businesses don’t want to import culled beef at large weights for slaughtering, but prefer importing steers in order to to fatten them for 100 days. This is done by other markets as well.

The official said that cows were needed to satisfy the increasingly high demand in Vietnam, though there are always latent risks in imports. This is because Vietnam cannot have favorable conditions to breed cows like in Australia.

However, he commented that Vietnamese businesses have been mostly importing cows to fatten and sell, while they do not think of long term strategies.

Why do Vietnamese businesses only focus on importing cows to fatten? Cuong said this was because it is the most profitable business.

“An enterprise in Long An province I know imported three ships of cows to feed and sell after three months. Each cow can be priced at up to VND16 million,” he said.

Also according to Cuong, to date, China still has not reached any agreement with Australia on the requirements for Australian cow slaughtering. Once the two sides can reach the agreement, China may increase imports from Australia, which means that the supply for Vietnam may be less.

“If relying on imports, Vietnamese would have to pay higher once the imports increase in prices. Meanwhile, the live beef in Vietnam is the most expensive in South East Asia ,” he said.

Vuong Xuan Hien from Sao Do Company said his company had recently imported 3,000 cows to fatten. It was dirt cheap at $3 per kilo only.

Chinh said Vietnam has been mostly importing cows from Australia, while the supplies from Thailand, Myanmar, India and Laos are getting shorter.

The Ministry of Agriculture and Rural Development is considering other potential markets such as Brazil and Argentina.