Vietnam to slash visa fees in November to boost tourist arrivals
Vietnam will cut visa fees for several types of international passport holders and overseas Vietnamese next month, in the latest effort to boost the country’s foreign arrivals.
Go Back 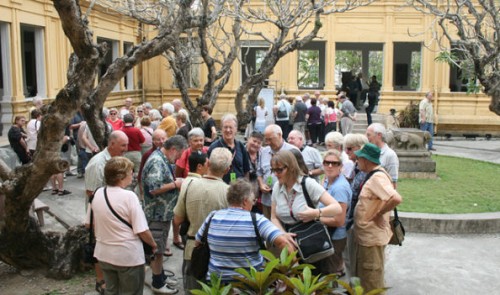 Starting November 23, the single-entry visa will cost US$25 instead of the current $45, whereas the fee for multiple-entry visas with validity of less than three months will go down from $95 to $50, according to a circular by the Ministry of Finance.

Foreigners will still have to pay $95 for the multi-entry visa with validity between three and six months, and $135 for between six months and a year.

“We have referred to the visa fees in other regional countries to decide on the new rates for Vietnam.”

For tourists who enter Vietnam and continue traveling to Laos and Cambodia, then come back to Vietnam to return to their home countries, the visa fee is $5 instead of $45 as currently charged, the official added.

Such a policy was immediately praised by local travel operators who said the change is more convenient for international customers.

Many tourists visit Laos and Cambodia after touring Vietnam, but return home via Vietnam, which is now connected to more international flights than the other two countries, according to travel firms.

The lower visa fees for this kind of travel will encourage more travelers to visit Vietnam on a typical three-country package, they told Tuoi Tre.

Vietnamese tour operators also said the cheaper visa fees are good news for the industry, at a time when Vietnam waives visas for fewer countries than their Southeast Asian peers Thailand, Singapore and Malaysia.

In July, the country started waiving visas for five European countries, including Germany, France, Italy, Spain, and the UK.

Vietnam is making the effort to win back foreign visitors, after international arrivals dropped continuously for 13 months from May 2014.

Some measures, most noticeably the visa-free travel policy applicable to those European countries, have paid off as tourist numbers began bouncing back in July.

In September, Vietnam received more than 626,000 international visitors, up 8.3 percent from the same period last year, according to the General Statistics Office.

The total number of international tourist arrivals in the first nine months of the year was 5.7 million, down 5.9 percent from a year earlier.