Vietnam wants to boost ties with Netherlands: President
Vietnam wishes to boost its multi-faceted cooperation with the Netherlands, considering this an example of its dynamic and effective relations with a European nation, President Tran Dai Quang stated while hosting Dutch Ambassador Nienke Trooster in Hanoi on September 21.
Go Back 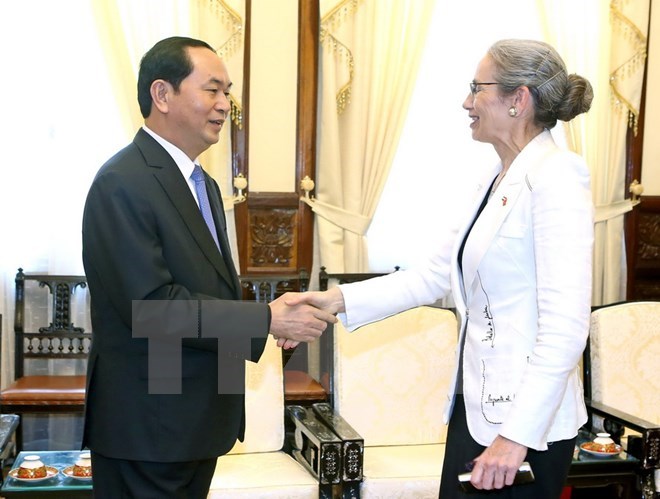 President Quang said he is delighted at the fine development of the bilateral relations, especially after the two countries set up their strategic partnership in water resource management and climate change response in October 2010 and signed a strategic partnership agreement on agriculture and food security in June 2014.

The Netherlands is continually one of the leading investors and trade partners of Vietnam in the European Union, he affirmed.

He suggested both sides intensify cooperation in water resource management, agriculture, energy, logistics, judicial affairs as well as collaboration between their localities.

Ambassador Trooster said that the Netherlands prioritises developing its relations with Vietnam in the fields of economics, trade and investment.

The country and Vietnam have numerous similarities in climate change response, she said, adding that her country has actively supported Vietnam in building strategies to respond to this phenomenon in the Mekong Delta region.

The Netherlands is also focusing on implementing its strategic partnership agreement with Vietnam in agriculture, with the priority given to agricultural restructuring, she added.

The diplomat pledged to do her utmost to further foster friendship and multi-faceted cooperation between the Netherlands and Vietnam.