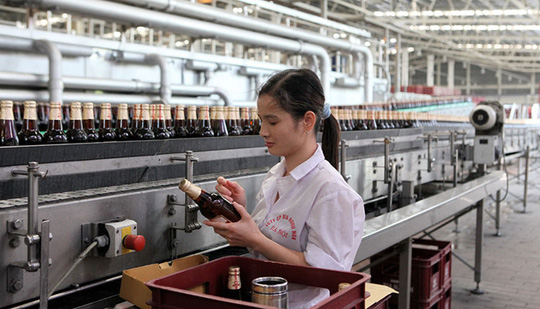 Robert Tran from Robenny, a consultancy group, commented that it would be a difficult task for Vietnam to implement two tasks at the same time – selling state’s shares for the best prices and preserving national brands.

t is expected that the shares will be put into auctions. Meanwhile, foreign investors are very powerful in capital and experience, and all of them show their strong determination to penetrate Vietnam, a promising market with stable two-digit growth rates for many years.

Two years ago, ThaiBev, a beverage giant, once sent words intimating that it wanted to buy Sabeco at the price of $2 billion. One year later, it offered $1 billion for 40 percent of Sabeco’s stakes (Sabeco was then valued at $2.5 billion).

Sources said that ThaiBev, which now holds 11 percent of Vinamilk, will try to acquire Sabeco’s and Vinamilk’s shares at all costs.

P/S, a well-known Vietnamese toothpaste brand, which once accounted for 60 percent of domestic market share, has been taken over by Unilever.

Meanwhile, Da Lan, which once held 70 percent of market share and dislodged Chinese toothpaste products, has been taken over by Colgate – Palmolive.

Experts, citing the examples, have called on the government to take cautious steps when selling its stakes, or Vietnam will suffer in the future.

“Vietnam may have no more strong brands of national stature. If so, the national economy’s vitality will depend on foreign businesses,” said Nguyen Tri Hieu, a renowned economist.

Robert Tran from Robenny said if the government strives to protect national brands, it needs to lay down clear policies to encourage Vietnamese investors to buy shares.

Nguyen Tuan Quynh, an investment expert, said the government should discuss with enterprises which shareholders would be suitable.

Vietnamese enterprises are not the buyers which offer the highest prices, but they are business owners that can help enterprises develop and protect national brands.