Vietnam warned it may yield to Myanmar in exporting rice
Myanmar has jumped into large markets, getting ready to become the No 1 in the world in rice exports, according to Vo Tong Xuan, the leading rice expert.
Go Back 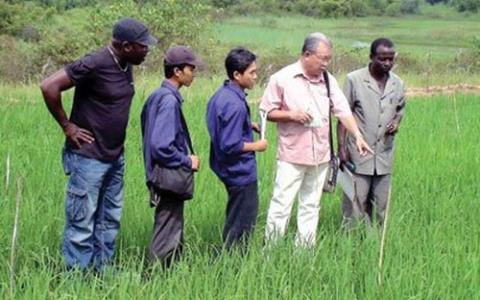 According to Xuan, Myanmar has great advantages in growing rice. Its land area is three times larger than Vietnam’s while the soil quality is better. The country has a large river network which ensures reasonable irrigation for rice fields. Meanwhile, the labor cost and the other input costs are lower, which allows products at competitive prices.

The big difference between Vietnam and Myanmar is that while Vietnamese farmers focus on growing high-yield rice varieties, Myanmar gathers strength on high-quality products despite the low yield.

Vietnamese farmers don’t want to grow high-quality but low-yield rice varieties like Thai, Myanmar and Cambodian farmers. They don’t like varieties with bring a low yield of 3 tons and allows harvest after 150 days. They prefer varieties which can bring 5-6 tons in yield and allow to harvest after 95 days.

Myanmar has bigger advantages than Vietnam in water sources: it is not affected by  hydropower dams in China and does not bear influences from the Thai’s river current diversion.

Xuan said Myanmar is likely to become the No 1 in the world in rice export and it is likely to outstrip Thailand as well. Myanmar does not strive to export rice in large quantities, but aims to make high-quality products.

Sources said that Myanmar has been trying to expand rice export markets, especially the EU. It also targets Kuwait, the countries in the Middle East and Africa, while the next markets would be Australia, Ukraine, Bangladesh, South Africa, India, Singapore and Malaysia.

Since 2012, China has been the major export market for Vietnam which consumes 1/3 of the total export volume. However, with the emergence of Myanmar, the market share held by Vietnam, Pakistan and Thailand in the market has fallen.

However, Vietnam’s rice export strategy remains unchanged. This, according to Xuan, is attributed to several reasons.

First, Vietnamese farmers insist on growing high-yield and short-term rice varieties, and they don’t care much about quality.

Second, Vietnamese rice exporters have been following the principle ‘every man for himself’.

In other countries, the quality of rice exports is controlled by the state, and substandard products cannot be exported.

Meanwhile, in Vietnam, the standards for rice exports set up by state management agencies are sometimes ignored.