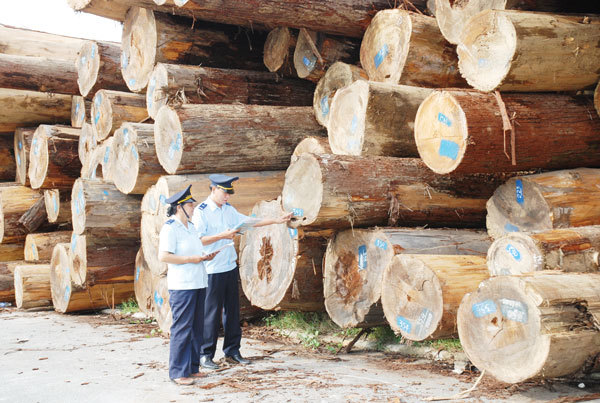 The General Department of Customs (GDC) reported that in 2018 the amount of timber from Africa accounted for 24 percent of round and sawn timber imported, and the figure rose to 26 percent in the first four months of the year.

To Xuan Phuc from Forest Trends noted that Vietnam has imported more timber from Africa because the products from the source have very competitive prices, around $300-400 per cubic meter as declared by importers at ports.

The changes in policies on natural resources management of Vietnam and countries which are loyal timber suppliers of Vietnam, such as Laos and Cambodia, have also prompted enterprises to seek new supply sources from Africa.

The demand for African timber made products has also increased in the domestic market. Most of the timber products from Africa are precious wood such as huong (sandalwood) and cam (Dalbergia oliveri).

The use of familiar-to-Vietnamese names for African timber helps consumption of products sourced from Africa.

Meanwhile, some Vietnamese enterprises have opened wood sawmills in African countries (Cameroon and Gabon) and provided timber to Vietnam.
Nguyen Ton Quyen, deputy chair of the Vietnam Timber and Forest Product Association (Vietfores), has warned that the risks in timber imports from Africa will be a barrier in satisfying the requirements of VPA/FLEGT.

According to Quyen, in Vietnam, both timber buyers and timber-made product consumers lack information about timber supply sources, making it impossible to trace the origin of the timber.

The policies on natural resources management by African countries show a lot of problems, inconsistencies and sometimes contradictory regulations. This leads to the risks of legality of the timber.

The government of Vietnam has built up VNTLAS, or the timber legality assurance system, to ensure that its exports of timber and timber products are from legal sources.

Quyen said that in order to run VNTLAS effectively, Vietnam’s management agencies need to take action to ease the risks from the supply chains.

It is necessary to start collecting information on legal regulations on forestry management, timber exploitation, processing, trade and other relevant regulations, such as labor and environment, of the African countries which provide wood to Vietnam.

In 2018 Vietnam spent $515 million to import wood from Africa, an increase of $19 million (3.9 percent) compared to 2017. Vietnam is the second largest importer of African wood material in the world, after China.