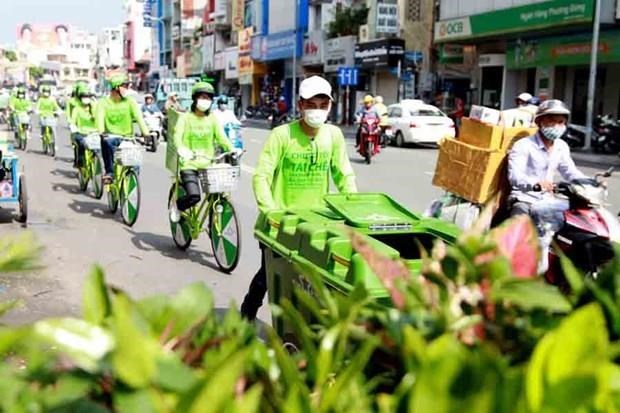 According to Nguyen Quang Vinh, General Secretary of Vietnam Chamber of Commerce and Industry (VCCI) and Vice Chairman of Vietnam Business Council for Sustainable Development (VBCSD), the number of enterprises interested in innovation and the business model of circular economy has been increasing in the last three years.

However, Vinh said the circular economy is still a new concept for many Vietnamese businesses, especially small and medium enterprises.

“The development of the circular economy in Vietnam is posed as an indispensable need and must be implemented,” he said at the seminar.

Vinh mentioned a study by Accenture Strategy, a multinational professional services company providing services in strategy, consulting, digital technology and operations, which revealed a circular economic model can open up market opportunities worth up to 4.5 trillion USD and create millions of jobs for the global economy by 2030.

“Many large corporations have been implementing the circular economy in their organisation,” he said.

However, the circular economy in Vietnam is only popular at large enterprises.

Executive Director of the US Business Council for Sustainable Development Andrew Thomas Mangan cited statistics that showed Vietnam generated about 27 million tonnes of waste in 2015. Now up to 70 percent of waste treatment yards are not classified as hygienic burial sites.

To turn waste into valuable materials, Mangan said businesses face many difficulties, including controlling and building databases. Therefore, it is difficult for investors to access the raw materials resources as well as assessing and controlling information about raw materials in the country.

According to Vinh, there have been a number of projects by scientists and domestic and foreign organisations deployed in Vietnam to recycle plastic waste and contribute to promoting the circular economy, creating green production, green consumption and changing awareness of environmental protection in each individual.

“In order to promote the development of the circular economy, it is necessary to perfect the system of standards and regulations as a basis for waste recycling and the linkages among research institutes, universities, scientists and businesses,” Vinh said.

The Ministry of Industry and Trade is currently drafting a National Action Programme on Sustainable Production and Consumption, which will be implemented in the period of 2021-30.

At the local level, HCM City has set a series of goals including reducing 60 percent of plastic bags by 2020 at supermarkets and trade centres and 50 percent in traditional markets.

Meanwhile, renewable energy and new energy will reach 1.7 percent of total energy capacity. At the same time, the relocation of pollution production facilities in residential areas is still ongoing.