Vietnamese cashew sector seeks to increase export value
Although Vietnam is a leading exporter of cashew nut, the country’s export value remains modest as many enterprises are still dependent on imported materials.
Go Back 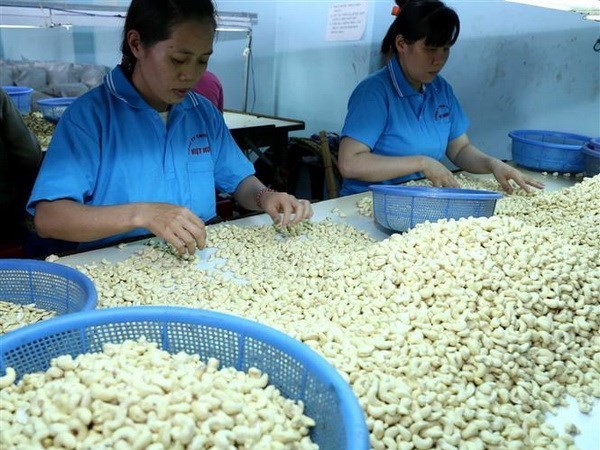 In 2018, Vietnam’s cashew export revenue hit 3.52 billion USD, but up to 70 percent of cashew materials for processing were imported, leading to high costs.

According to the Vietnam Cashew Association (Vinacas), in 2019, Vietnam plans to ship abroad 350,000 tonnes of cashew nuts for about 4 billion USD, a lower volume but higher value than the year previous.

By increasing sales of processed products instead of raw cashew, the ratio of processed cashew nuts of Vietnam is expected to rise 30 percent, double that of two years ago.

Vinacas General Secretary Dang Hoang Giang said that along with improving the quality of processed cashew nut, in June 2019, the association will survey the West Asian market, bringing about more choices for exporters in terms of market and product.

Vietnamese cashew is popular in choosy markets such as the US and the EU, paving the way for domestic exporters to expand markets.

Along with seeking new markets, Vietnam aims to maintain major ones such as the Netherlands, China, and especially the US, which consumes up to 40 percent of the country’s cashew nuts, said Giang.

He added that the current market trend is products with clear origin, as customers prefer products with strictly controlled quality.

Hoa noted that with the acceptation of Vietnamese technology over the years, African countries have started processing cashew and reducing their exports of material cashew. They will be Vietnam’s competitor in the next five years.

Amidst the dependence on materials from other countries, it is crucial for the Vietnamese cashew sector to improve quality to enhance competitiveness, he said.

Pham Van Cong, Vinacas President said the association will ask for support from the Ministry of Industry and Trade in implementing the “Cashew of Vietnam” promotion programme as well as other programmes to assist the building of Vietnamese cashew trademark and providing information and technical support for exporters.

Vinacas will ask the Ministry of Finance to deploy measures to encourage foreign-invested forms to focus on processing, contributing to increasing the ratio of processed products.

Although Vietnamese cashew is defined by the International Nut and Dried Fruit Council as having higher quality than that of African countries and Cambodia, the price of material cashew is not much different than in other countries.

Therefore, the building of a Vietnamese cashew trademark should start by building a trademark for materials.

Cong said Vinacas and the Ministry of Agriculture and Rural Development have built a set of national criteria for material cashew nuts, which will be issued in 2019 and is expected to reduce problems in the quality of materials.