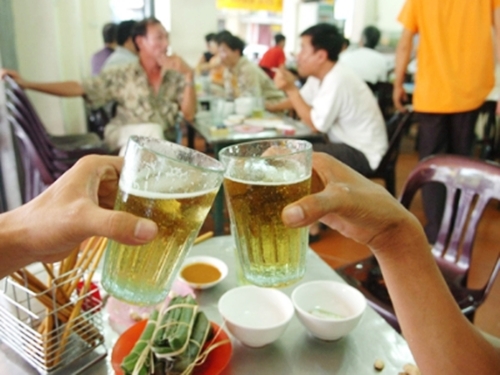 In 2015 production and consumption of beer in Vietnam reached 3.4 billion liters, an increase of 10% over the previous year and nearly 41% compared to 2010.

A report of the Vietnam Beverage Association (VBA) said that in 2015 production and consumption of beer in Vietnam reached 3.4 billion liters, an increase of 10% over the previous year and nearly 41% compared to 2010. In particular, the Saigon Beverage Corporation (Sabeco) alone accounted for 1.5 billion liters.

VBA officials said that due to fierce competition in the market, the growth rate of the beer and beverage sector in the last few years dropped, compared to the period of 2005-2010. This year, the beverage industry paid about VND30 trillion of taxes to the budget, lower than in 2014.

Meanwhile, the consumption of alcohol and soft drinks also grew significantly with 75 million liters and 4.8 billion liters, respectively. Although this is a conditional business, the management of homemade liquor, fake and smuggled wine was ineffective, affecting the production of beverage enterprises.

“Homemade wine consumption is estimated at 200 million liters a year, 3 times more than industrial alcohol. The import of foreign wine is also increasing year on year,” a VBA official said.

Commenting on the market in 2016, VBA said that the free trade agreements (FTAs), which Vietnam has signed with various countries, will help the industry have a large consumer market. However, this is a big challenge for local companies.