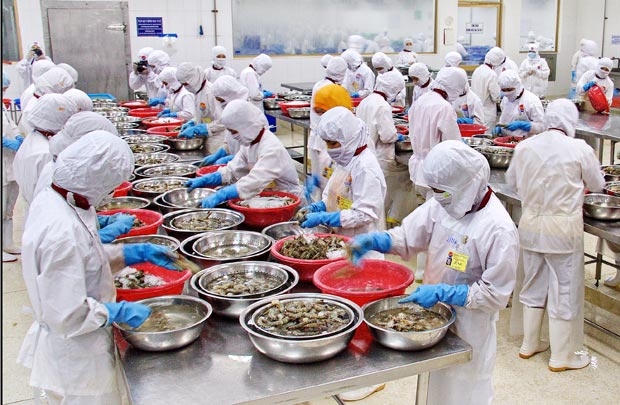 Market surveys all show that Vietnamese products are more favored by consumers since domestic manufacturers understand the Vietnamese taste.

Meanwhile, the advantage of foreign-invested enterprises is western-style products such as sausage, ham and bacon.

A survey showed that hundreds of new products have been launched into the market in recent years, and the majority of them are from Vietnamese enterprises.

However, according to Nguyen Huynh Dat, director of the Vietnam-Japan Food Technology JSC, the pressure in the food processing industry is caused by consumers’ changing taste.

He also said that the processed food market is the target of many multinational groups, therefore, Vietnamese enterprises may lose to foreigners if they cannot cement positions in the market.

Le Thi Thanh Lam, deputy general director of Saigon Food also said that Vietnamese enterprises have advantages in the market as they can make products at low costs, but Thailand remained a rival.

Nguyen Kim Ngan, director of Viet Huong Production & Trade JSC, also said that in the context of global integration, Vietnamese enterprises have to reform technology and invest in new products, or they will be crushed by foreign enterprises.

Vissan, the nation’s leading fresh meat and processed food manufacturer, said it budgets 0.5 percent of annual revenue for upgrading technology and equipment and on research & development of new products.

Saigon Food has recently launched a series of new products. Instead of frozen broth, consumers now can try broth which can be preserved at room temperature.

Meanwhile, steamed fish products can be used within 30 days if they are kept at the temperature of 0-50oC.

Having realized that the market demand for instant rice gruel is high, Saigon Food has cooperated with the HCM City Nutrition Center to develop many different products of this kind, targeting different groups of consumers, from children to adults. Its Baby rice gruel now has the selling price at just 1/3 the price of imports.