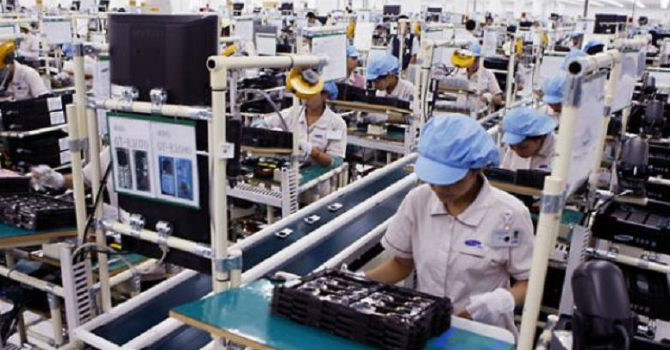 However, only 21 percent of Vietnam’s small & medium enterprises can join global supply chains, while the figures are 30 percent in Thailand and 46 percent in Malaysia.

Therefore, the enterprises can hardly benefit from foreign invested enterprises (FIEs) through the transfer of technology, knowledge and productivity improvement.

Vietnam is now a big motorbike manufacturer with 3.2-3.5 million products churned out every year. Eighty percent of motorbike parts are made domestically, but mostly by FIEs, while Vietnamese enterprises can only make simple items such as batteries and plastic accessories.

Honda makes up 60 percent of total motorbike output in Vietnam. It has 110 vendors, of which only 23 are Vietnamese enterprises, while others cannot satisfy Honda’s standards on technology, time and human resources.

As for the textile & garment industry, Vietnam is now the second biggest garment exporter, after China, to the US market. However, it has to compete with other rivals, including Myanmar and Cambodia.

Chair of the Vietnam Textile & Apparel Association Vu Duc Giang said to ensure sustainable development, it is necessary to set up affiliate chains with fiber manufacturers, textile, dying and garment companies in order to create products with high added value.

In global supply chains, which include many enterprises, each enterprise is in charge of making specific components which will be used to create finished products.

Apple, for example, in order to make an iPhone, has to use accessories from hundreds of suppliers in the world. Where should Vietnamese enterprises be in such value chains?

Vu Dinh Anh, a respected economist, said before joining global value chains, Vietnamese enterprises need to identify what they can do and where they should be in the value chains.

Pham Chi Lan, an economist, said the government needs to create policies for support enterprises, most of which are small, in terms of land access, corporate income tax and capital.