Home » Press » Vietnamese manufacturers use high-tech to compete in productivity

Vietnamese manufacturers use high-tech to compete in productivity
The fourth industrial revolution, which is a hot topic in Vietnam, has brought unprecedented economic benefits to many businesses.
Go Back 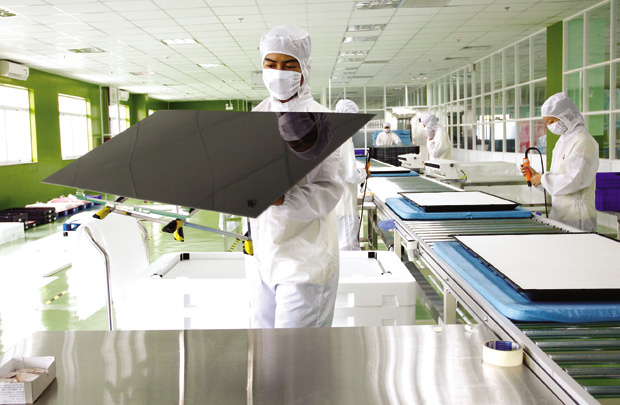 The technological solutions applied by the Lam Son Sugar Company (Lasuco) have allowed it to keep watch over cultivation and harvesting of sugar cane, processing at the refinery and its business performance, work which was formerly undertaken by 40 accountants.

According to Nguyen Ngoc Nha Nam, director of Minerva, the provider of the technological solution, Lasuco, has 32,000 hectares of sugarcane, and in the harvest season, it needs a fleet of 1,000 trucks to carry the sugarcane.

Lasuco in the past needed many accountants to do the books, plan the harvesting and transportation of sugarcane for each fleet of trucks, and keep watch over the sugar refinery process.

Later, to improve management over the fleet (location of trucks, where they are going and if they return to the refinery), Lasuco attached a journey monitoring device to every truck and the information is displayed on an internal system.

In addition, to identify farmers growing sugarcane for the company, Lasuco is using an app under the mode of 3D map.

The app can send signals to a server even if there is no phone waves, and when smartphones catch the waves, the system will automatically update information.

“Now, the accountants’ work is undertaken by the automatic AI system,” Nam said, adding that the system can forecast the time of rain to determine the harvesting plan.

The fourth industrial revolution, which is a hot topic in Vietnam, has brought unprecedented economic benefits to many businesses.
Using high technologies is also the top priority of Pan Saladbowl. The enterprise specializing in growing flowers for export has invested VND10 billion for every hectare of the glasshouse, where the environment and climate are set to facilitate the development of daisies.

The cultivation process is managed with sensors and a computer system.

According to a representative of Pan Saladbowl, managers don’t need to go to the site, but they still know what workers are doing and their level of performance.

Every worker is equipped with a smartphone with management software programs.

In Vietnam, many manufacturers have put robots into production lines to replace workers and optimize productivity. At Vinamilk, the nation’s leading dairy producer, transportation and sorting of goods are done by robots.

According to Do Phuoc Tong, chair of the HCMC Electrical & Mechanical Engineering Enterprises’ Association, the application of high technologies and robots in production is inevitable. The association has set up a robot club for member companies to introduce new technologies to them.