Vietnamese restaurant chains attract foreign investors
Foreign funds have poured millions of dollars in restaurant chains in Vietnam, where a large population with a growing middle class is expected to provide solid support to the growth of the food and beverages industry.
Go Back 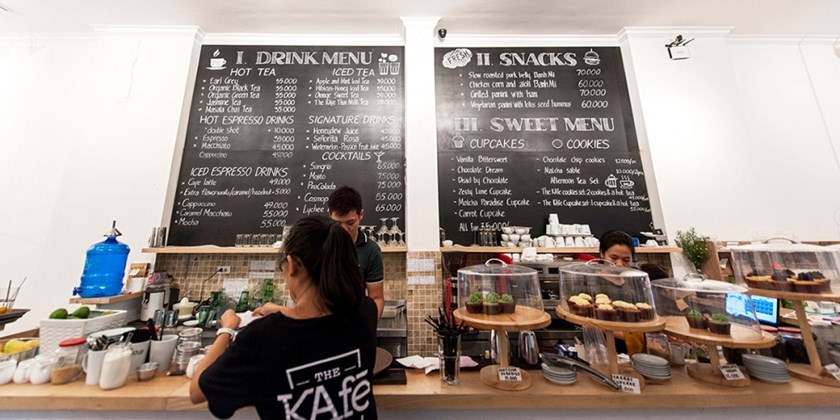 KAfe Group Limited, which runs a coffeehouse chain in Vietnam, received an investment of US$5.5 million from institutional investors in London and Hong Kong.

Hong Kong-based Cassia Investments, a private-equity firm specializing in funding lower middle-market companies across Asia, has provided 90 percent of the funding. The other 10 percent came from another investor based in London.

KAfe founder Dao Chi Anh, who said the funding would allow the chain to expand its operations in Vietnam, hopes to increase the number of outlets to 26 from 12 last year.

KAfe Group is also eyeing an overseas public listing at a later stage for further expansion in the country.

It is reportedly developing its own branded coffee and tea ranges and a pressed juice range.

Anh’s coffeehouse chain is one of many restaurant chains to attract foreign investment in recent years. Huy Vietnam Food Processing Company, which operate more than 100 restaurants serving Vietnamese food, got an infusion of $11 million from US fund Franklin Templeton.

Knowing the development strategy of Huy Vietnam Food Processing Company, Franklin Templeton decided to invest in it after holding negotiations in Singapore, he said, adding that his fund would invest further in the company whenever the it needs.

Huy Vietnam, founded in 2007, has received three rounds of funding worth $65 million from foreign private-equity firms, including Fortress Capital. It runs casual restaurant chains such as Mon Hue and Pho Ong Hung.

Huy said it plans to expand in big cities and make an IPO.

Economist Nguyen Minh Phong said investment in dining chains is a developing trend. It is not much affected by economic downturns since food is indispensable. “Thus, the sector will always be attractive to investors.”

High profit is another factor that makes the business mode attractive to investors, he said.

In 2014 another restaurant chain operator, Golden Gate, received an infusion of $35 million from Standard Chartered.

Earlier Vietnamese private equity firm Mekong Capital said it had exited from Golden Gate with a net 9.1-fold return on its investment.

Mekong Capital Partner Chad Ovel said Golden Gate has grown from five restaurants in 2008 (when the fund first made its investment) to 67 now.

Mekong Capital reportedly invested $2.6 million in Golden Gate in 2008, and two years later started to partially sell off its holding, according to the Wall Street Journal.

The retail and F&B sectors are considered the two most attractive for private-equity transactions, according to a recent study by auditing firm Grant Thornton Vietnam.

Vietnam is considered as one of the most promising consumer markets in Asia, benefiting from a large population and rapid growth in incomes and urbanization.

The increase in disposable incomes has caused huge demand for low- to high-end products, changes in lifestyles, and a habit of drinking and eating out, particularly in major cities.

It is expected that in 2015-20 the beverages and packaged and fast food sub-sectors would grow at respectively 7-11 percent and 3-9 percent a year, the report said.

Besides buying shares of Vietnamese companies, many foreign businesses have also opened their own restaurants in Vietnam. Restaurants such as Japan’s Tokyo Deli and Sakura and Thailand’s Coca Suki are mushrooming in big cities.

Many other foreign food and beverage companies like Pizza Hut, Domino’s Pizza and Baskin-Robbins have opened their stores via franchisees in Vietnam.

An industry insider said: “The young and dynamic consumers are the main reasons foreign firms are seeking franchises in the local market. We can expect that franchises in Vietnam will grow rapidly.”

Vietnam has a population of nearly 90 million people with 65 percent aged below 35, a segment that is highly receptive to modern offerings, he said.

Franchising can help companies cut costs and risks when expanding in foreign markets.

The franchising market has been very busy over the past few years, as companies from the US, EU, Japan, and South Korea have jostled for space.