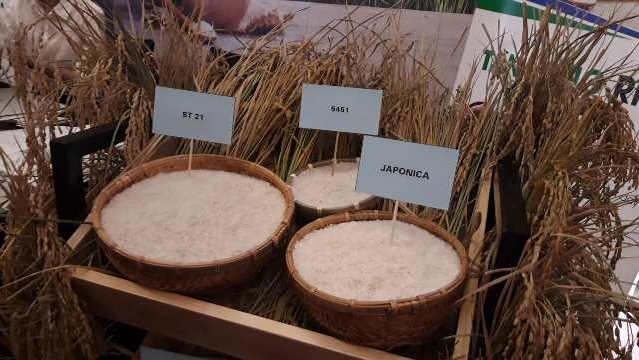 The Vietnamese rice sector will attempt to increase the volume of fragrant rice, specialty rice and Japonica rice

The Ministry of Industry and Trade held the 10th World Rice Conference in Hanoi on October 10-12, in a bid to raise the value of Vietnamese rice. The conference attracted a large number of international speakers, leading global rice companies and financial consultants in the field.

Vietnamese rice is present in 150 countries and territories worldwide

The production and export of rice have played a crucial role in the socio-economic development of Vietnam, particularly in recent years, said Deputy Minister of Industry and Trade Do Thang Hai, at the opening ceremony of the World Rice Conference.

Statistics released at the conference showed that Vietnam’s annual rice exports make up 15% of the total volume of global rice exports. The country exported over 4.89 million tonnes of rice in the first nine months of this year, with a total value of US$2.46 billion, an increase of 6.7% and 21.3% in terms of volume and value respectively, over the same period in 2017.

In particular, Vietnamese rice is now consumed in 150 countries and territories across the world including demanding markets. Vietnam remained the world’s third largest rice exporter in 2017 after India and Thailand.

Hai noted that progress in rice production along with appropriate farming methods have gradually enhanced the quality of Vietnamese rice.

“Remarkably, the Government issued Decree No.107/2018/NĐ-CP on August 15, 2018, to replace Decree No.109/NĐ-CP dated November 4, 2010, on the export of rice, which will create a favourable environment and promote the investment, trading and export of rice,” Hai stated.

He said that the new decree alongside other mechanisms and the project on the restructuring of the rice sector will contribute to boosting the linkages between production and markets, while ensuring the quality of rice exports and affirming the reputation and brand name of Vietnamese rice.

Senior Vice President and Global Business Line Leader of Agriworld at Intertek, Rui Esteves, said that Vietnam has recorded impressive economic growth over the past 10 years. The country has also signed a number of trade agreements with European countries and other countries across the world which will facilitate the export of Vietnamese goods, Rui Esteves noted.

“Vietnam is one of the world’s largest rice and coffee exporters and there are many other types of goods that are expected to make huge contributions to the country’s economic growth in the future,” Rui Esteves added.

Although Vietnamese rice is present in many countries around the world, Deputy Minister Hai admitted that the rice products of Vietnamese brands are not well-known by the majority of end consumers in other countries.

“Although Vietnamese rice has been available in most countries and territories around the world, including demanding markets, the capacity of rice traders in getting access to markets, signing contract, dealing with international trade disputes, and joining the global value chain remains limited. The brand name of Vietnamese rice is unpopular to a majority of consumers in foreign countries, “Deputy Minister Hai said.

Hai also stated that Vietnamese rice is facing fiercer competition amid tightened policies from import and export countries in addition to impacts of climate change and new diseases.

Thus, the Vietnamese rice sector will move towards clean and organic rice production, while diversifying its products processed from rice. In addition, more specialised growing areas of high-quality rice will be built following standard procedures from the selection of seedling to cultivation, harvesting, processing and packaging.

The national rice sector will also attempt to develop its prestige and brand name in the international market through increasing the volume of fragrant rice, specialty rice and Japonica rice, while reducing the volume of low-grade rice.

The Ministry of Industry and Trade will also increase negotiations and open the rice market as well as organising more trade promotion and brand building activities for Vietnamese rice.

“Decree No.107/2018 /NĐ-CP effective on October 1, 2018, has helped to perfect the legal framework on rice exports, facilitating the export of organic rice and rice with micronutrients, while enhancing the quality of Vietnamese rice exports,” Hai said.