Vietnamese still among most confident consumers
While consumer confidence across a number of Southeast Asian markets dipped in the third quarter it increased slightly in Vietnam, to 105, up 1 percentage point (ppt) quarter-on-quarter and 3 ppt year-on-year and the country remains among the Top 10 most optimistic globally, according to the latest Consumer Confidence Index released by global information and measurement company Nielsen on November 4.
Go Back

The survey also reveals that Southeast Asia is home to the world’s most confident consumers despite the dip in the third quarter. 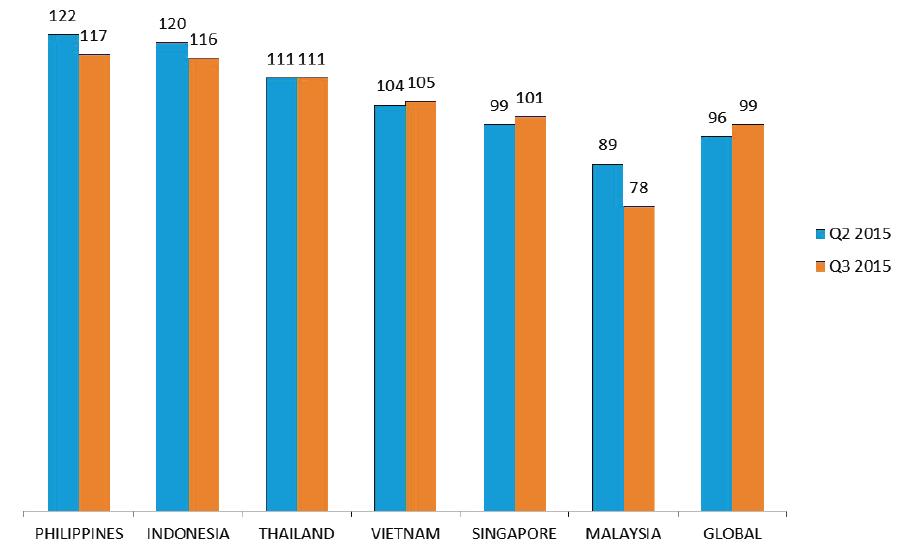 “With the exception of Malaysia, Southeast Asian confidence levels are still tracking above the global average, but the past few quarters have seen some tapering in some markets, which is reflective of a softening in the region’s economy,” said Mr. Regan Leggett, Nielsen Client Service Director in Southeast Asia, North Asia, and Pacific.

Across the six Southeast Asian markets, consumers’ focus on building their financial security for the future remains prominent, with 71 per cent of respondents in the region putting their spare cash into savings.

When it comes to savings, consumers in Vietnam keep the highest globally (78 per cent, up 3 ppt quarter-on-quarter), followed by Indonesia (74 per cent), the Philippines (67 per cent), Singapore (66 per cent), and Thailand and Malaysia (64 per cent), according to the report.

The intention to change spending to save on household expenses continues to be the top priority for Vietnamese consumers.

Eighty-six per cent of Vietnamese consumers have adjusted their spending habits over the last 12 months to save on household expenses because most think the country is in an economic recession.

Sixty per cent have tried to save on gas and electricity and reduced their spending on out-of-home entertainment compared with this time last year.

Around half of Vietnamese consumers have cut down on new clothes (56 per cent) and telephone costs (47 per cent).

However, after covering essential living expenses, Vietnamese consumers are willing to spend more on big ticket items such as holidays (42 per cent), home improvements / decorating (41 per cent), and new clothes (39 per cent).

The current state of the economy and their health will be the top concerns of Vietnamese consumers over the next six months (both 17 per cent of respondents), according to the report. Other consumers in Vietnam worry about job security (15 per cent), increasing utility bills (10 per cent), and work / life balance (9 per cent).

The Nielsen Global Survey of Consumer Confidence and Spending Intentions, established in 2005, measures consumer confidence, major concerns, and spending intentions among more than 30,000 respondents with internet access in 60 countries.

Consumer confidence levels above and below a baseline of 100 indicate degrees of optimism and pessimism.