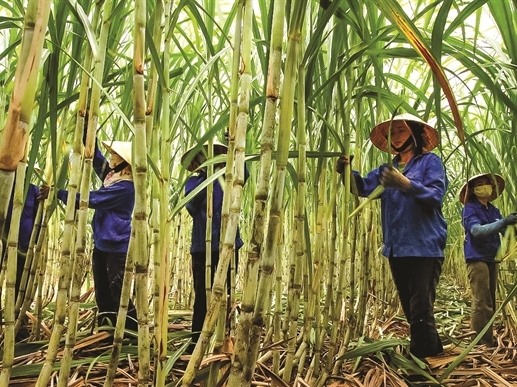 Domestic producers are under pressure from smuggled sugar.

The sugar industry is set to harvest its new crop next month, but it has suffered due to smuggled sugar from foreign countries.

Doanh said during 23 years of the Government’s one-million-tonne sugar programme, this year’s crop has seen the most difficulties.

Low consumption means some sugar factories are in debt after buying sugar cane from farmers but being unable to sell the refined product for the usual rate.

“One cause of the situation is smuggling, which has been an issue facing the sector for years,” Doanh said.

Although smuggling is not a new problem, he said it is much worse this year. Smugglers have dominated the domestic market and smuggled sugar is being sold openly, presenting a challenge to authorities.

At some local shops in the western provinces and the central coast, inspectors found smuggled sugar being displayed with Thai labels. The flood of smuggled sugar into the domestic market has had a serious impact on the sugar industry, Doanh said.

Although Doanh’s association has reported the situation repeatedly, the problem has not been solved.

Department of Agro-product Processing and Market Development statistics show that as of August 15, the country’s sugar inventory was still 622,000 tonnes – 67,500 tonnes higher than the figure at the same point last year.

Industry representatives said smuggled sugar from Thailand is usually priced 1,000-2,000 VND lower than domestic sugar, and production costs in Vietnamese mills are 2,000-3,000 VND higher than those of factories abroad. This means the domestic sugar industry finds it hard to compete with illegal imports.

VSSA said local sugar factories must accept that, in order to compete with smuggled sugar, they will have to sell their products at lower prices – even if it means lower profits.

Local sugar mills are already selling their products at less than 11,000 VND per kilo, the lowest price in years.

Pham Quang Vinh, chairman of the Can Tho Sugar Company (Casuco), said the lack of control on imports has been a problem for the industry.

Smuggled sugar is not subject to the import and value-added taxes, meaning Vietnamese producers have to sell their products under production cost to compete.

Vinh said farmers would be forced to lower price of raw sugarcane. He calculated that with the country’s average output of 15 million tonnes, reducing each kilo of sugarcane by just 100 VND would cost farmers 1.5 trillion VND (64.4 million USD) in total.

Dang Viet Anh, chairman of the Son La Sugarcane Company, agreed that smuggled sugar could be sold at so low price because its suppliers evade taxes.

Local sugar could compete if not for the VAT, so Vinh suggested eliminating the tax for domestic businesses. It currently sits at 5 percent.

An estimated 500,000 to one million tonnes of smuggled sugar makes its way from Thailand to Vietnam each year.

In addition, they suggested a temporary ban on sugar imports to reduce pressure on local mills.

VSSA anticipates more difficulties with the 2018-19 crop. They said sugar mills should invest in technologies to diversify their products and lower production costs.