Vietnamese think economy not running well, prices still too high: survey
A new survey has found that many Vietnamese are not happy with high consumer prices and the widening rich and poor gap in their country.
Go Back 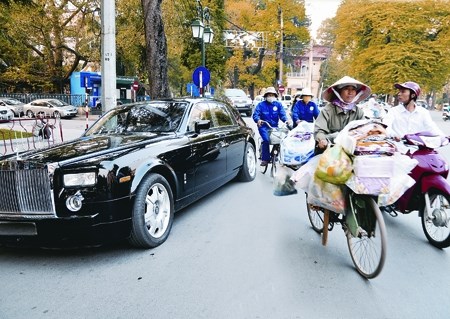 A new survey has found that many Vietnamese are not happy with high consumer prices and the widening rich and poor gap in their country.

Members from the World Bank and the Vietnam Chamber of Commerce and Industry (VCCI) said at a conference Thursday that their new survey found many people and businesses are not confident about the economy.

Dau Anh Tuan from VCCI said the rate of people satisfied with the country’s economic situation was only 19 percent, which is “very low.”

Of all the 1,600 people questioned, only 29 percent said the transition to the market economy over the past five years has been fast, while 36 percent said it has been slow.

The survey found that many people do not believe there is enough competition in the market to result in lower prices and higher quality.

“People still expect to see intervention from the government,” Tuan said, citing evidence from the survey that 75 percent want the government to step in and stabilize prices of necessities. The rate was higher than the survey in 2011.

But at the same time, people do not believe in the effects of the government’s existing measures to stabilize prices so far, as 47 percent of the people surveyed want more effective policies.

The government has let state-owned providers of water, power and fuel raise prices every year, pushing commodity prices up.

Also, 47 percent have expressed frustration over the widening rich and poor gap.

While the country’s GDP per capita, estimated at more than $2,000 in 2014, is among the world’s lowest, Vietnam still has many luxurious cars and more than 100 “super rich people,” a label given to those with assets worth more than $30 million.