Vietnamese tycoons compete with big foreign companies
In many ‘duels’, it is not the foreign giants with powerful financial capability and experience, but rather the Vietnamese conglomerateswho are the winners.
Go Back 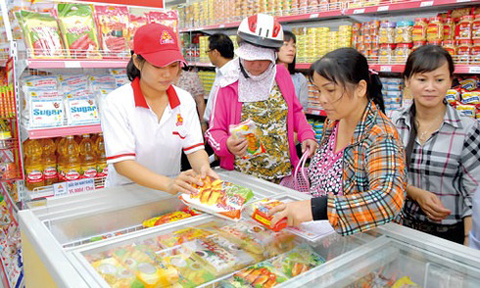 In March 2016, Vietnamese Anco won in the duel with CJ CheilJedang, a big investor from South Korea and had the right to buy 14 percent of stake of Vissan, one of the nation’s leading food processor at its share auction.

With the deal worth VND1.4 trillion, Anco has become the strategic shareholder of Vissan, the move that allows it to officially join the meat market valued at nearly $10 billion.

CJ did not conceal its strong determination to become a Vissanstrategic shareholder, but still missed the opportunity, though it spent hundreds of billions of dong to acquire 4.2 percent of Vissan’s stake from Vissan’s IPO held some days before the share auction.

Analysts commented that it would help Vietnamese food enterprises improve their positions in the food supply industry which is at risk of being acquired by CP Group from Thailand.

Five years ago, Vietnam once witnessed an impressive merger & acquisition (M&A) deal in which Masan Group acquired the stake of Vinacafe Bien Hoa, the instant coffee brand with the largest domestic market share.

The success in taking over Vincafe Bien Hoa has made Masan become a ‘big player’ in the coffee market, which, together with Trung Nguyen, acts as the rival to Nescafe, a foreign strong rival in the market.

Vietnamese businesses ‘swim against the current’

Local newspapers recently reported about the large takeover deals in which foreign conglomerates bought a lot of Vietnamese strong brands. Lotte and CJ from South Korea, SCG and Central Group from Thailand, Ayala from the Philippines and Aeon from Japan have been reported as taking over Vietnamese Prime, Nguyen Kim and FiviMart.

However, analysts noted that Vietnamese conglomerates have also shown their power in M&A deals.

The unexpected appearance of the Saigon Securities Incorporated (SSI) and its president Nguyen Duy Hung in the Lotte-Bibica struggle in 2013, for example, led to the failure of the South Korean Lotte’s plan to takeover Vietnamese Bibica.

Prior to that, Bibica admitted that Lotte attempted to turn Bibica into one of its subsidiaries and make Lotte products instead of developing new products. Analysts then predicted that Bibica would fall into Lotte’s hands.

However, this did not happen. SSI and relevant businesses now hold 46 percent of Bibica’s stake, and Lotte 44 percent.