Vietnam's cashew exports likely to reach $2.7 billion
The cashew sector is expected to earn a record of 2.7 billion USD from export of 300,000 tonnes of processed cashew nuts this year, according to the Vietnam Cashew Association (VINACAS).
Go Back 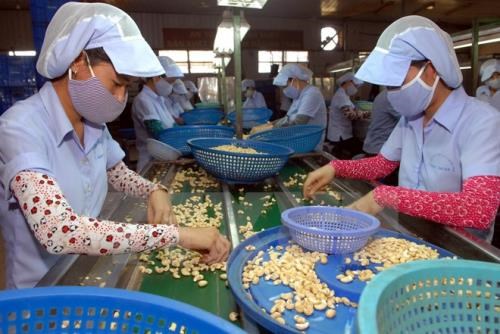 According to the Ministry of Agriculture and Rural Development, in the first 10 months of the year, Vietnam exported 291,000 tonnes of cashew nuts, generating 2.33 billion USD, a year-on-year increase of 5.8 percent in volume and more than 16.6 percent in value.

Vietnam currently accounts for half of the world’s cashew exports, and has been the leading exporter for the last 10 years.

Its cashew products are exported to 80 countries and territories, with the US, the Netherlands and China being the main markets, accounting for 33.9 percent, 13.8 percent and 13.3 percent of Vietnam’s total cashew exports, respectively.

Vietnam is home to over 300,000 hectares of cashew trees in the southern provinces of Binh Phuoc, Ba Ria – Vung Tau and Dong Nai; Phu Yen and Binh Dinh provinces in the central region; and the Central Highlands province of Dak Lak.