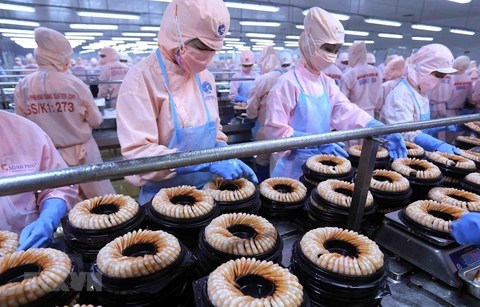 The processing and manufacturing sector remained the pillar of GDP growth, posting a growth of 11.18 per cent, lower than the same period last year but much higher than H1 of 2012-2017.

The agro-forestry-fishery sector expanded 2.39 per cent, contributing 6 per cent to GDP growth. Expanding 8.93 per cent, and 6.69 per cent, the industrial and construction sector, and service industry contributed 51.8 per cent, and 42.2 per cent, respectively, to growth.

Meanwhile, the service industry was backed by rosy wholesale and retail sales, financial activities, banking and insurance, transportation and warehouses.

The Vietnamese economy had shown positive signs, with business confidence remaining high among domestic and foreign investors in the period, Lam said.

According to Nikkei report, the Viet Nam Manufacturing Purchasing Managers’ Index (PMI) stood at 52 points, which is higher than regional countries. Producers believed that customer demand improved, and there were rises in new orders both from domestic and overseas clients.

A survey conducted by the GSO in Q2 showed that most businesses had good business results, and felt upbeat about the situation in Q3.

Also at the meeting, GSO revealed that the consumer price index (CPI) in the first half of 2019 increased on average 2.64 per cent against the same period last year, the slowest pace recorded over the past three years.

GSO said that the index in June dropped 0.09 per cent over the previous month but expanded 2.16 per cent year-on-year.

The agency attributed the fall and the slight growth to price management efforts as well as the flexible monetary policy of the State Bank of Viet Nam.

Do Thi Ngoc, head of the Price Statistics Department, said prices of some consumer goods went up in the first six months due to increased demand during the Tet (Lunar New Year) holiday.

The adjustment of electricity prices and the greater demand during Tet – the longest and most important annual holiday in Viet Nam – and the second quarter which marked the run of the hot weather led to a year-on-year rise of 5.84 per cent in electricity prices.

Prices of construction materials and office supplies also increased. Between January and June, the price of oil and gas fell 3.55 per cent against the corresponding period last year, contributing to a 0.15 per cent fall in the CPI.

In the first half, the figure went up 1.87 per cent year-on-year, which, GSO said, signaled the efficiency of the monetary policy.

The Ministry of Planning and Investment (MPI) will continue working hard to ensure gross domestic product (GDP) growth reaches 6.8 percent at the end of the year.

The target is lower than the actual number of 7.08 percent recorded in 2018.

The ministry will work with other ministries, government agencies and local authorities to keep inflation below 4 percent this year.

It will also keep a close watch over regional and international economic developments while working with the ministries of Finance and Industry and Trade and the State Bank of Vietnam to predict possible outcomes of developments.

At the next meeting of the 14th National Assembly in November, the ministry will deliver the draft laws on investment, enterprises and public-private-partnership (PPP) model for discussion.

A plan to raise capital for the development of the water and land transport systems will be developed so the systems are connected to the Vietnam-Cambodia border gates.