Vietnam’s processed coffee looks to create a buzz in global markets
Several businesses have set up strategies to help their processed coffee products win the trust of global consumers, given their belief that Vietnamese coffee has the strength and potential to do so.
Go Back 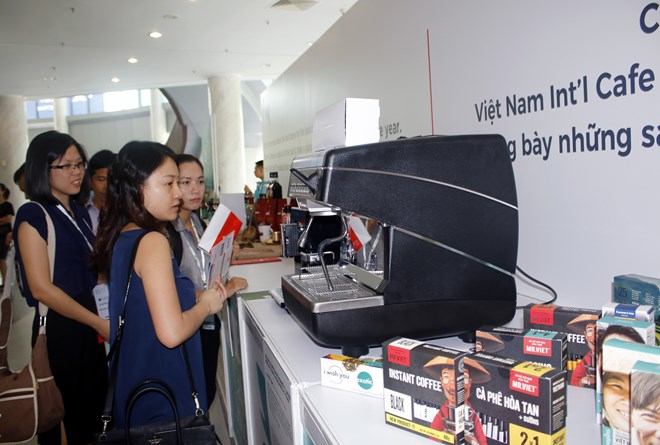 Facing consumers’ fear of unsafe food, the Vinamit JSC has developed clean farming methods and applied high technologies in food processing and preservation. Aside from other dried agricultural produce, freeze-dried coffee products are one of the firm’s latest ideas.

Many surveys show that today’s consumers have high demands for clean coffee. Notably, almost all export markets request that product origins be traceable. Businesses need to not only actively build brands but also satisfy the demands of modern consumerism.

Tran Thanh Hai, Chairman of the Board of Directors of the NutiFood Nutrition Food JSC, said the domestic instant coffee market currently faces fierce competition from large, long-standing coffee brands from both Vietnam and other countries.

To survive in this competition, NutiFood has taken its own way, he said, adding that it has invested in having the best materials from well-known coffee farming areas in the Central Highlands province of Dak Lak. It has also made use of technological advantages and research and development strengths to create an instant coffee product that has the same taste as a filtered roasted coffee with sweetened condensed milk.

Le Tan, Vice Chairman and Secretary General of the Vietnam Cuisine Culture Association (VCCA), once said, while talking about Vietnamese food, that foreign tourists usually think of pho (beef noodle soup) and banh mi (Vietnamese sandwich). However, there remain many other delicious dishes that are yet to be widely recognised, including iced milk coffee. Bloomberg used to name Vietnamese iced milk coffee among the world’s top 10 coffee drinks, while CNN suggested that travellers coming to the country should try the drink.

Therefore, the VCCA prioritises potential products of Vietnamese food to introduce to the world, with iced milk coffee culture as one of them, he noted.

Tan said after entering a partnership with NutiFood, the VCCA will include “Nuticafe Fresh Iced Milk Coffee” on the list of products to be introduced at trade promotion events and activities to popularise Vietnamese cuisine.

Meanwhile, King Coffee – a Trung Nguyen International brand – took part in and impressed visitors at a coffee festival in Los Angeles, the US, last August.

Kevin Nguyen, Business Director of King Coffee in the US, said more and more American consumers are choosing Vietnamese coffee, even though there are plenty of coffee products from famous global brands in this market. King Coffee still has a high chance of penetrating the American market.

Trung Nguyen International has developed its distribution network to more than 60 countries and all the 63 provinces and cities in Vietnam. It has opened an office in California and plans to expand the distribution system through the King Coffee shop chain.

Commenting on the US market, VCCA Chairman Nguyen Quoc Ky said that this is a potential market for Vietnamese farm produce. The important thing is how to create effective market access strategies and increase the added value of that produce through convenient and top-quality processed goods.

Coffee is one of Vietnam’s key strengths, with the country now the second largest exporter in the world, he said.

He noted that fresh iced milk coffee and dried coffee products are made using modern technology and meet international standards as promising products because they are Vietnamese specialities, while many other countries are strong in hot coffee and other varieties.

Big opportunities are also accompanied by numerous challenges, Ky said, stressing the need for stronger connectivity in trade promotion and pioneer steps by major businesses to optimise the advantages of Vietnamese coffee on international markets.