Vietnam's rice industry needs to establish value chains
After the Government took steps to prevent rice prices from falling in February, prices have started to inch up in the Cuu Long (Mekong) Delta – the granary of Viet Nam – though not by much.
Go Back 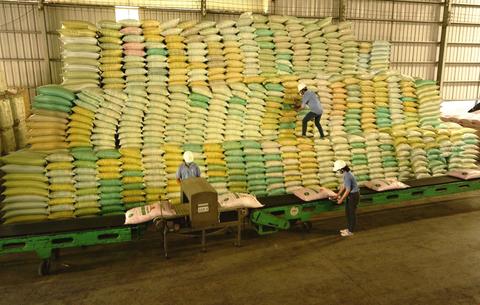 Rice stocked at a food processing company in Tan Hong District, Dong Thap Province. Rice prices inched up in recent days thanks to rescue efforts by the Government.

Still, the Government’s purchase of rice to stock reserves was a temporary solution. The rice industry requires more radical and sustainable solutions like establishing value chains.

Following a requirement of the State Bank of Viet Nam in early March, several commercial banks provided loans with three to six month terms at preferential rates of 6 per cent to enterprises so they could buy rice from farmers.

This helped push up prices in region by around VND200-300 per kilo.

According to the Ministry of Agriculture and Rural Development, Vietnamese rice must now compete fiercely with other big producers like Thailand and India as well as emerging producers like Cambodia, Myanmar and Pakistan, who were providing a variety of high quality varieties of rice.

China – the largest rice export market of Viet Nam – was opening its doors to rice imports from India, Cambodia and Myanmar.

Pham Van Chinh, Director of the Ministry of Industry and Trade’s Import-Export Department, said that many markets had significantly changed their rice import policies, such as increasing tariffs and allowing more rice providers to compete.

Deputy Minister of Industry and Trade, Tran Quoc Khanh, said that countries importing rice tended not only to increase rice production by themselves but also to diversify import markets to reduce dependence on a single or several export markets.

“Viet Nam should have a more radical plan for the development of the rice industry,” Khanh said, adding that establishing value chains to diversify rice types and enhance rice quality was critical.

However, to do this, enterprises needed more credit support from the Government.

“It is important that credit policies for agricultural and rural development are implemented efficiently. Credit policies with an aim of sharing risks and damages for participants in the agriculture production chain should also be promoted,” Binh said.

Director of Soc Trang Province’s Department of Agriculture and Rural Development Luong Minh Quyet said that in the long term, the rice industry needs proper planning for raw materials. In addition, enterprises and farmers needed to be supported in terms of farming techniques, processing technologies and seeking consumption markets.

Xuan also pointed out that the rice industry in Viet Nam lacked key enterprises that worked directly with international intermediary firms to promote exports like Thailand.

Firms and farmers also need to get updates on market information and demand for rice production, Xuan said.

At a Government meeting on rescuing rice in February, Prime Minister Nguyen Xuan Phuc stressed that the way forward for Vietnamese rice was improving quality and increasing added value to meet the global market demands and build the brand for Vietnamese rice. — VNS