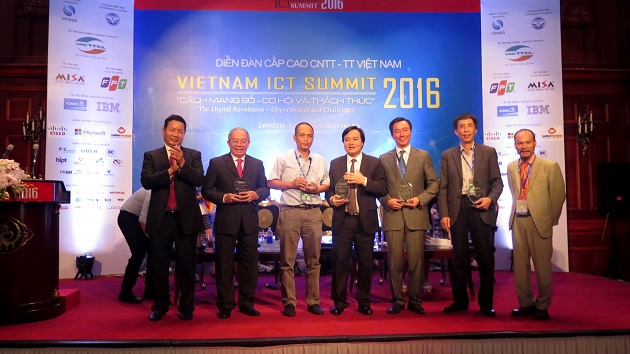 The hackers also took control of the speaker system at Noi Bai airport for a few minutes, during which the speakers broadcast an English-speaking male voice distorting Viet Nam’s claims over the East Sea.

The hackers claimed to be the 1937CN from China, which is one of the biggest hacker groups in the country.

The official website of Vietnam Airlines, vietnamairlines.com, was hacked by the 1937 CN group on the same day. The airline customer database was stolen and made public on the internet.

On November 3, VNPT officially launched its 4G service on Phu Quoc Island in the southern coastal province of Kien Giang. This is the first locality in the country where VNPT is providing the 4G service.

Article 292 of the Penal Code, which stipulates penalties, including prison sentences, for providing unlicensed online or telecom services, is inimical to IT start-ups.

At the second session of the National Assembly, with the authorisation of the Prime Minister, the Ministry of Justice asks to revoke Article 292.

Previously, a petition calling for the scrapping of Article 292 was sent to officials, ministers and agencies and collected nearly 6,000 signatures after only one week

These users received advertising messages from Sam Media, which they thought were free. After the case was uncovered, Sam Media was given a fine of VND55 million ($2,400).

The Tien Phong Commercial Joint Stock Bank (TPBank) is almost cheated out of US$1.13 million by international hackers in May.

Fortunately, the bank detected the suspicious transactions in time and promptly contacted relevant agencies to stop the hackers.

In August, a Vietcombank customer said she discovered that her account had notifications of transfer of VND500 million. At a meeting between the customer and Vietcombank, the bank found that she had browsed a scam website on her phone and the site had stolen her banking information and password.

The cases indicats that hi-tech criminals are targeting banks and Vietnamese users who do not have experiences in information security.

6. Clamp down on pre-activated SIMs

Five mobile network providers – including Viettel, VNPT (VinaPhone), MobiFone, Gtel Mobile and Vietnammobile – sign a commitment on October 28 with the Ministry of Information and Communications to intensify the confiscation of pre-activated SIM cards in order to reduce spam text messages.

More than 15 million pre-activated SIMs have been locked and retrieved since.

The dialing codes of all cities and provinces will be changed early next year, according to a decision by the Ministry of Information and Communications in November. The process will kick off after the Tết (Lunar New Year) holidays, on February 11.

Another 23 localities will get new codes on April 15. The final phase will be initiated on June 17 for the rest of the country.

The Government chooses 2016 to be the National Startup Year.

Promoting entrepreneurship based on innovation and building Viet Nam to become a startup nation is the fastest way to develop entrepreneurial forces, especially high-tech enterprises, creating breakthrough for the development of a digital economy.

The law comprises eight chapters and 54 articles prescribing the rights and responsibilities of offices, organisations and individuals in ensuring cyber information safety and civilian encryption.