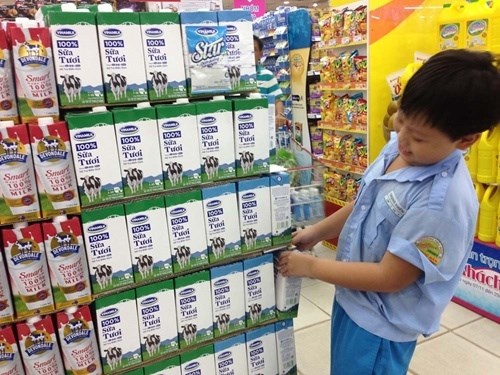 With shares ending at 147,000 VND each on July 15, the firm is valued at about 7.9 billion USD in the market. VNM shares became one of the best-sellers in market after the Government announced a plan to divest all state capital from the firm in 2015.

The current price of VNM has reached its highest level since late 2007, marking a more than 57 percent increase year-on-year and nearly 26 fold increase compared with the first day of listing on January 19, 2006.

In the local market, more than 1.2 million shares of VNM were worth 176.5 trillion VND (7.9 billion USD). Vietcombank, in second place, was worth 143 trillion VND and Vietnam Gas Corporation (GAS) was worth 121 trillion VND.

VNM’s shareholders benefited from the gains made by the firm, getting a 60 percent dividend, or 6.4 trillion VND, in 2016.

VNM was a money-maker for a long time for the State Capital and Investment Corporation (SCIC), which held more than 45 percent of state capital in the firm.

SCIC’s investment gained more than 1 billion USD after the Government announced a divestment plan. If it divests now, SCIC will earn at least 3.56 billion USD. If it continues to hold shares, SCIC will get 3.2 trillion VND (145 million USD) as dividend this year.

In 2015, SCIC received more than 2.7 trillion VND as cash dividend from the firm. SCIC leaders said they had submitted the divestment plan to the Government, which would decide the time and method of divestment that best benefits the State’s budget.

Singapore’s F&N Dairy Investments Pte Ltd was also one of the major gainers from their investment in Vinamilk. Owning more than 11 percent equity, valued at 19. ​​ 4 trillion VND, the fund expects to receive nearly 800 billion VND in dividend.

Arisaig Asia Consumer Fund Limited, which has a stake worth 2.9 trillion VND, will also gain 120 billion VND in dividend.

Recently, the company decided to sell 9.44 million preferred shares to officers and employees at just 356 billion VND, while the market valuation is pegged at more than 1.3 trillion VND.

In 2016, Vinamilk plans to earn 44.5 trillion VND in revenue and 8.3 trillion VND in after-tax profit, an increase of 11 percent and 6 percent, respectively, over 2015. Vinamilk is expanding its investments in the United States, Europe and Australia.