Vinamilk’s growth and future plans: CEO
Vinamilk, Việt Nam Dairy Products Joint Stock Company, expects to reach its target of becoming one of the top 50 global dairy firms in the next three years after it has shown strong development over the past 40 years.
Go Back 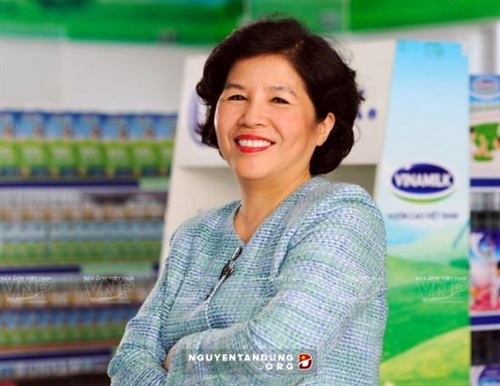 Mai Kiều Liên, Vinamilk Chief Executive Officer, told the Vietnam News Agency about Vinamilk’s successes in production and business strategies as well as challenges it has faced and targets for the future on the occasion of Vinamilk’s 40th birthday.

You have worked at Vinamilk for four decades and you have also been the “captain” of Vinamilk for 26 years. What experience have you shared to local firms to expand your business to the global market?

I think only Vietnamese firms that have the knowledge and suitable targets will have a chance of development. That is one of six principles that Vinamilk requires of its managers. It is that managers must be an international expert in their field at their working environment.

Therefore, Vinamilk must become an “expert” in the dairy industry before developing foreign investment. Is that right?

Việt Nam’s dairy industry is still young in the global context, while many dairy firms were founded hundreds of years ago. Vinamilk has produced and also taken on board lessons and experiences from other firms to improve the quality of its products to reach international standards.

When enough conditions are met, Vinamilk will consider investment into foreign markets, as well as study the opportunities carefully before taking on investment activities abroad, due to its inherent risks in geographic distance, culture and management styles.

In addition, Vinamilk must make investments according to long-term strategy but not in each company or in each nation. The firm has invested in a milk powder production factory in New Zealand because the nation is a supplier of milk for the world market. When having a stable supply, Vinamilk will be more confident in implementing large plans on the world market.

Meanwhile, Vinamilk has bought Driftwood dairy factory in the US to supply milk products made in Việt Nam to the US market and will also meet conditions to sell organic milk products in the US because domestic conditions have not permitted us to produce organic products.

The firm has opened a representative office in Poland to distribute its products to the European market in the future while it has built a factory in Cambodia recently after many years of developing market shares there.

In the future, Vinamilk will continue expanding operation in the world market and pursue merger and acquisition strategies to develop further.

A company needs many factors to be successful in production and business. What are the important factors for success at Vinamilk?

State-owned capital at Vinamilk after equitisation in 2003 accounted for 80 per cent, or VNĐ1.84 trillion. In 2016, the State capital reduced to 44.73 per cent of the firm’s total capital worth VNĐ91.5 trillion.

In addition, the State has gained revenue of VNĐ14 trillion from selling its shares and receiving dividends. Value of the State capital at Vinamilk has increased by 57 times from 2003 to now.

Vinamilk has set plans to control the domestic market and then enter the world market.

The firm has also diversified its products for the local market. In 1987, it recovered production of Dielac milk powder for children and now it has produced suitable dairy products for children.

The company has taken time to change people’s habit of consuming foreign milk products and then expanded its market share on the local market.

The dairy industry is one of industries that will suffer the most negative impacts from Việt Nam’s joining of the Trans Pacific Partnership agreement (TPP). How will TPP affect Vinamilk’s development plans when the agreement comes into effect?

It is true there will be difficulties but the company has solutions. For instance, other countries have cold and dry climates supporting the raising of cattle and have a high capacity of milk, while Việt Nam is hot and humid, being disadvantaged for similar development. Vinamilk has applied new technology to change those disadvantages. Of course, it must also have strong financial resources for investment in technology.

Another difficulty is the small scale of feeding cattle at farming households. In other countries, farmers have fed at least 100 units of cattle while Việt Nam’s farmers have fed 2-3 units per household. Vinamilk has faced difficulties in managing them, so it must change the situation.

By 2018, about 8,000 farming households co-operating with Vinamilk will have qualified herds of cattle, with high capacity thanks to Vinamilk’s support which ranges from providing varieties to upgrading technology.

The company will plan to build a factory in New Zealand to supply stable material for milk. It also will develop milk processing factories on a large scale and with the use of modern technology to reduce production costs.

Now, Vinamilk exports its products to 40 markets worldwide with an export value of $250-270 million per year. To remain in existing markets in the future, especially after TPP comes into effect, it must have high quality products with competitive prices.

When Vinamilk grows further, the firm could be bought by large multinational corporations. What is your opinion on this issue?

Vinamilk is a national brand. Of which, foreign investors hold 49 per cent of its shares, 45 per cent are owned by the State and 6 per cent owned by domestic individuals and organisations.

No foreign investor at Vinamilk has control, while SCIC is representative of the State to keep 45 per cent of State capital at the company. When the State withdraws its capital from Vinamilk, the State will still ensure the State’s benefit from Vinamilk’s development in the future.

I think Vinamilk has set up development plans to remain and expand its market shares for all product lines at home and abroad in the future.

If the company works well, there is no chance for multinational corporations to buy the company.