VN becomes 7th member of CPTPP trade deal
Viet Nam has officially become the seventh member of the Comprehensive and Progressive Trans-Pacific Partnership (CPTPP) after all National Assembly (NA) deputies on Monday approved a resolution on the agreement.
Go Back 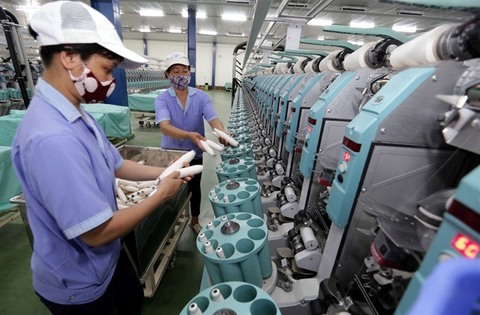 A weaving and dying production line at the Viet Nam National Textile and Garment Group’s factory in the northern province of Nam Dinh.

According to NA’s external relations committee chairman Nguyen Van Giau, it is a key political decision that confirms Viet Nam’s strong ability to integrate with the international community, respond to the developments of the global economy, and progress with other free trade agreements.

The CPTPP trade pact, which was signed by Viet Nam and 10 other economies in the Asia-Pacific region on March 8, 2018 in Chile, came after the US withdrew from the Trans-Pacific Partnership (TPP) deal in early 2017.

The CPTPP pact, which succeeds the TPP deal, had been in talks for eight years, Giau said. “Six nations have passed the deal and the trade pact will come into effect within 60 days from October 30, 2018.”

Most NA deputies supported the trade pact and their approval of the CPTPP deal during the 6th NA meeting was appropriate, showing Viet Nam’s commitment to the development of the regional and global community, he said.

According to experts, Viet Nam’s approval of the CPTPP could help the nation reform and improve its legal system, better its business and investment environment, and raise the economy’s competitiveness in global markets.

The industries that are expected to benefit from CPTPP trade include textile and garment, fishery, wood processing, logistics, transportation and real estate.

However, there are potential risks that Viet Nam could encounter, including a more competitive domestic market as cheaper imports would surge into the country.