VN businesses fail to invest in technology
Only two out of 15,000 enterprises in the central city have invested in technological research in production.
Go Back 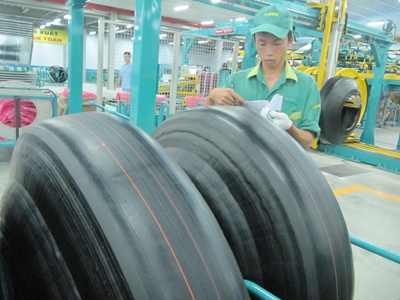 Director of the city’s Science and Technology Department Le Quang Nam said it was rare for companies to be given technological enterprise status.

This means most companies in Da Nang are yet to reserve funds for technological research in production.

“It is rare of companies to attain the standard or regulation on technological status. The requirement for that is businesses have to reserve funds for scientific and technological research to produce marketable products with a hi-tech ratio,” Nam said.

“Technology is seen a pivotal factor that will help businesses survive in the tough competitive market, when Viet Nam joins the Trans-Pacific Partnership (TPP) and the ASEAN Economic Community,” he said.

Nam said the city’s policy in giving priority to technological and scientific research was yet to lure enterprises.

Vice-Chairman of the city’s people’s committee Vo Duy Khuong said technological and scientific research was the weakest point of the enterprises in Da Nang.

“The products of local businesses cannot compete against those from Thailand or Malaysia in ASEAN due to poor investment in technological research, while TPP is a tough challenge for Vietnamese businesses as it will bring stricter regulations on hi-tech standard production,” Khuong said.

“The number of manufacturers investing in science and hi-tech research can be easily counted year on year. Da Nang’s Pharmaceutics joint-stock company (Danapha) was the only local business that invested in the city’s Hi-Tech Park with international production standards,” he said.

Vice-Chairman and General Secretary of the city’s Small-and Medium-sized Enterprises Association (SMEs) Nguyen Van Ly said 90 per cent of the businesses were small or medium scale, with capital starting from VND500 million (US$24,000).

“Most local businesses operate in services and trading, and there are several manufacturers in the garment, rubber, cement and steel as well as furniture sectors,” Ly said.

“That’s one reason why enterprises could not allocate funds for developing technology.”

Chairman and General Director of Danapha Nguyen Quang Tri said his company reserved an annual fund of VND2 billion ($95,000) for technological and scientific research to produce hi-tech and competitive products for the global market.

He said Danapha has completed research on a nanotechnology-based cancer injection, which could lead to cheaper drugs for cancer treatment.

“TPP will really bring tough competition in technology. We decided to invest in the Hi-Tech Park with focus on cancer drugs production,” Tri said.

Director of the city’s industrial and trade department Phan Van Kha said capital was the greatest barrier for businesses that wanted to improve production technology.

“Local enterprises still use poor production lines. They need to import or boost co-operation with foreign partners in technology transfer. However, their small-scale investment capital prevents them from approaching hi-tech production,” Kha said.

He said a Korean business offered local enterprises co-operation in technology transfer, but only two out of 30 local businesses were eligible.

Nguyen Duc Tri, general director of Hoa Tho textile and garment joint stock corporation, said deficiency in raw material, design and technology were huge problems being faced by his enterprise for participating in the TPP.

“Participating in the TPP would be a huge opportunity for us to restructure our production and make investments in advanced technology,” Tri said.

“Although the company earned $100 million per year in exports, its production is still dependent on imported materials. A small change in the price of the material would lead to weaker competition against rivals in the export market,” he said.

Only foreign direct investment (FDI) companies operating in the city have strategies on technological and scientific research.

The city has 25 FDI projects in tourism real estate, 54 per cent of the total FDI capital in the city.