VN businesses struggle to find new labourers
Vietnam may have a large pool of manual workers, but not enough it seems to cope with growing demand.
Go Back 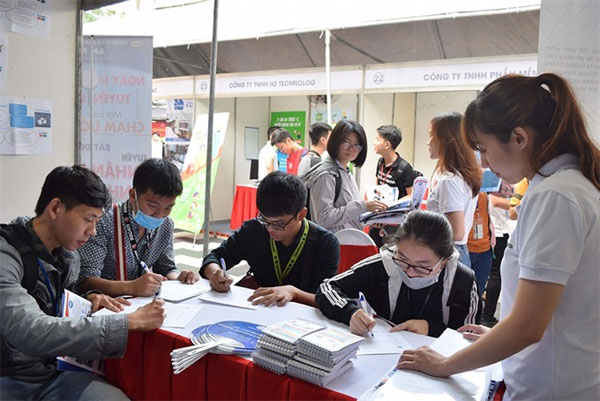 Pham Dao Nguyen, an official from Ho Tay Water Park Company in Tay Ho District, said the company needed to recruit many positions but it only found a small amount workers during several days of recruitment.

“Every year, ten days after Tet, companies face labour shortages because many workers remain on holiday,” she said.

As one of the few workers looking for job at the first fair in Thanh Xuan District, Nguyen Tien Nghia, from Dong Anh District, was faced with many options.

He found a job working as a security guard with the salary of VND7-10 million (US$300-430) per month but he was still keeping his options open, looking for a better salary.

“I came here with the desire to find a popular job with a salary ranging from VND8-10 million per month, but the most importance is a stable job,” said Nghia.

Although the labour market is quiet at the beginning of the year, many economic experts think this is a good news, showing a low unemployment rate.

Labourers would resume looking for job after the first lunar month’s Full Moon Day Festival, which fell on February 19, he said.

Labour shortage in the south

The issue is not unique to Hanoi. Many provinces and cities across the country are in need of labourers.

Companies expanding in the southeastern provinces of Binh Duong and Dong Nai are in need of thousands of new workers.

As many as 345 enterprises need to recruit 47,500 people, according to the Binh Duong Province Labour Confederation.

Many of the companies are foreign-invested firms specialising in textiles, garments, footwear or electronics.

Nguyen Dinh Khanh, vice chairman of the Binh Duong Province Labour Confederation, said enterprises would pay a monthly salary of VND7 million to VND9 million (US$301-387.6) plus other allowances and bonuses.

The companies will accept workers without experience and offer them on-the-job training, Khanh said.

In Dong Nai Province, nearly 30,000 workers will be needed by next month, according to the provincial Department of Labour, Invalids, and Social Affairs. Of these, 90 per cent are manual workers.

Statistics from the Centre for Human Resource Forecasting said in the beginning of the year, HCM City was about 500,000 workers short.

A garment enterprise there said only 200 workers returned to work, down up to 50 per cent of the workforce as workers quit their job, the Viet Nam Television (VTV) reported.

To compensate for the shortage, the company is struggling to recruit new workers meaning it is difficult to meet orders, said an official of the company.

Although businesses always adjust salaries and preferential policies to keep staff, many still find another job in their hometown because of the high cost of living in the city, a representative of HCM City Business Association said.

Experts say in order to limit labour shortages, in addition to implementing preferential policies for workers, enterprises should apply science and technology to limit the use of many workers.

They advise enterprises to relocate their factories and plants to the provinces that have abundant workforce to take advantage of idle labourers.

Referring to the cause of a lack on manual labour, Le Quang Trung, deputy director of Employment Department, Ministry of Labour, Invalids and Social Affairs, said there were many reasons.

“In the context of economic development, many investors come to Vietnam,” Trung told VTV.

“It is expected that foreign investors may attract up to 10 million manual workers. Through surveys, businesses in localities will this year have a higher demand for labour.

“The demand of workforce in many small-scale enterprises has increased by 30-40 per cent, so demand is higher than supply.”

The fact that workers change jobs after Tet always happens because of the wage competition between businesses in the same industry, making workers want to change, said Mai Thuy Hang, deputy director of Human Resources Department of Navigos Group, the Recruitment Services Company.

A report by Navigos Group shows that 79 per cent of enterprises need manual workers and office staff.

Both Hang and Trung agree that it is needed to ensure the conditions for employment and income, along with related benefits to attract employees to enterprises.