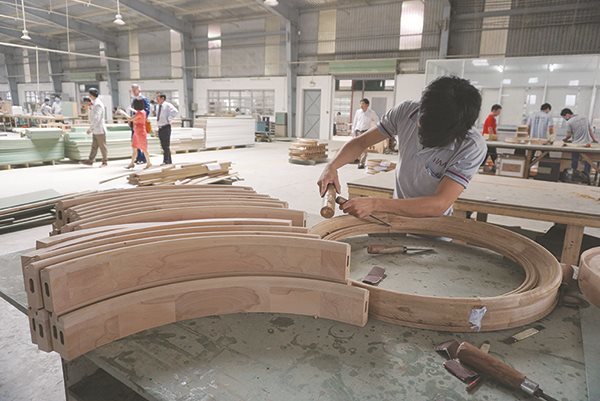 According to the Ministry of Agriculture (MARD), the majority of woodwork processing enterprises are small scale. Five percent of them are state owned, while the other 95 percent are private, including 16 percent of foreign invested ones.

A report found that woodwork export turnover from Vietnam to the US increased from $3.1billion in 2017 to $3.6 billion in 2018. In the first four months of 2019, Vietnam exported$1.4 billion worth of products to the country, mostly plywood, particle board, chairs and interior kitchen products.

Experts also see great opportunities in exporting woodworks to the EU, especially after the EVFTA was signed in Hanoi late last week. Plywood and similar products Vietnam exports to the EU will see tariffs removed within 3-5 years after the agreement implementation, while the tariff for interior and exterior products will be removed soon after EVFTA takes effectsm (the current tariff is 2.7-5.7 percent).

At present, Vietnam’s woodworks to the EU mostly go to Germany, France, the UK, Spain and Italy. However, with EVFTA, the market will be expanded to 28 countries.

The EU consumes $80-85 billion worth of woodworks each year. As such, Vietnam’s current exports just account for one percent of market capacity, which means opportunities are still great for Vietnam.

Ministries predict that revenue from the EU market may reach $1 billion by 2020, while the figure is expected to hit $900 million this year.

One of the great advantages of Vietnam is the big FDI in the industry. According to the Foreign Investment Agency (FIA), in the first five months of the year alone, Vietnam attracted 49 new FDI projects into the industry, or 73 percent of total investment.

However, analysts noted that the investment scale of the projects is small, just $2 million per project.

They also warned of risks Vietnam is facing, urging state management agencies to assess the type of risks in FDI projects and cooperate with the timber association to check all products exported from Vietnam to the US to identify the risks related to trade fraud.